Wojcik, Reigle appointed to Northeast Board of Governors 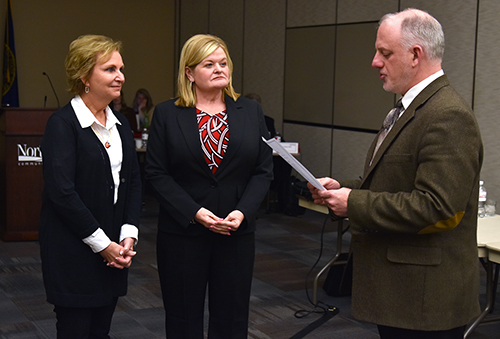 NORFOLK, Neb. – Northeast Community College has named two area women as members of the institution’s board of governors. Pat Wojcik and Jeanne Reigle will serve the remainder of the terms of two members who resigned from the board after several years of service.

Wojcik, South Sioux City, will serve District III, which is comprised of Dakota and Dixon counties in their entirety and the eastern portion of Cedar County. Reigle, Madison, will represent District IV, which covers Burt, Cuming, Stanton, and Thurston counties in their entirety and the southern portion of Madison County. Both women were sworn in Thursday during the board’s monthly meeting in Norfolk.

Wojcik is a licensed realtor in Iowa, Nebraska and South Dakota and is employed as the Siouxland community manager for Ho-Chunk Inc. in Sioux City, Iowa. She serves on the boards of the South Sioux City Chamber of Commerce, the South Sioux City Housing Authority, where she is chairperson, South Sioux City Cardinal Foundation, Siouxland Coalition Against Human Trafficking, PEO Chapter DE, and Sioux City Rivercade. Wojcik is a past board member of SafePlace, formerly known as the Council on Sexual Assault and Domestic Violence.

She said she values the work of higher education, especially that of community colleges.

“Community colleges have a very important part in higher education as it is a beginning for basic classes that can be completed before transferring to a four-year college and it offers many non-traditional students with affordability and accessibility,” Wojcik said. “Community colleges offer so much for an individual seeking a specific trade. The biggest and best impact that Northeast Community College gives to this region is the fact that a high percentage of students remain in the region after graduating which is so beneficial for the growth of the area.”

Reigle, is a retired agriculture producer. She and her husband, John, grew the family farm and feeding operation that was started by his parents. She presently serves on the Northeast Community College Foundation Board and was co-chair of the college’s Nexus Campaign for new agriculture facilities. Reigle previously served on boards of directors of the Elkhorn Valley Cattlemen, Preservation Madison Inc., and the Madison Area Chamber of Commerce; on various committees and leadership positions at her church and at the local and state level in the P.E.O. Sisterhood. She co-chaired the Nebraska Cattlemen’s Ball in 2008.

Reigle said community colleges are essential in workforce development efforts as they equip graduates with hands-on training that allows them to directly enter the workforce the moment they earn their credentials.

“It has been my observation that Northeast Community College has been very successful in drawing attention to its accomplishments and potential. The broader impact is multi-faceted: adequate workforce, population growth, tax base growth, building partnerships with new companies and industries, providing new local and state level leadership candidates, and stimulating economic and social growth,” Reigle said. “I see my role as being a link between my assigned region and the college, assisting in setting the vision and mission of the college, and overseeing its operations.”

Julie Robinson, chair of the Northeast board of governors, is pleased to have Wojcik and Reigle serve as representatives of the college.

“We are thrilled that Pat and Jeanne applied to serve on the board of governors. Both women are most qualified and will lend their expertise in our discussions. They will provide wonderful input in helping Northeast continue to move forward to meet the needs of our students and constituents across our 20-county service area.”

Wojcik and Reigle were among 12 candidates who applied for the seats – three for District III and nine for District IV. They will run for their respective seats when they come up for election in 2024.

The Northeast Community College Board of Governors is made up of 11 members, with two members representing each of five districts. There is one at-large member who represents the College’s entire 20-county service area.

Scott Gray, vice president of administrative services at Northeast Community College, administers the oath of office to two new members of the college’s board of governors on Thursday in Norfolk. Pat Wojcik, South Sioux City, (center) represents District III, which is comprised of Dakota and Dixon counties in their entirety and the eastern portion of Cedar County. Jeanne Reigle, Madison, will represent District IV, which covers Burt, Cuming, Stanton, and Thurston counties in their entirety and the southern portion of Madison County.