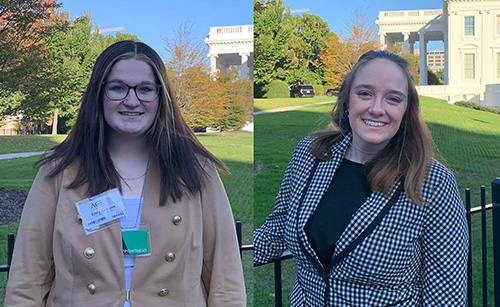 Emily Carstens,Creighton, a social work and drug and alcohol counseling major, and Hannah Stahl, Potter, a Health Information Management Systems major, were among others from across the country who were selected to attend a summit with Vice President Kamala Harris to discuss issues affecting college students.
The summit was a follow-up the Vice President held with a group of college and university presidents this summer. Northeast was asked if a student or two would be interested in participating. Carstens and Stahl volunteered and said they were honored to be among the 75 students from 33 states selected.
“It was just very eye opening to see all these different colleges represented,” Carstens said. “From a community college perspective, it made us feel like we're important too.”
In addition to Northeast and three other community colleges, students from Dartmouth, Georgetown University, Spelman College, among others attended the meeting.
During the hour-long session with the Vice President, students spoke on what’s occurring on their campuses following recent Supreme Court decisions. She and student leaders also voiced supporting survivors of sexual violence on college campuses and making it easier for individuals to receive healthcare free from stigma. Following the meeting, the students met in breakout sessions with other students to exchange stories of their college experiences.

“There were just a lot of ideas coming from different student voices,” Stahl said. “It was just really empowering.”
The Northeast representatives said after the day of meetings, it was obvious to them that the students at the conference shared similar views on current issues regardless of where they live or attended school.
Carstens said, “There were a lot of students there that were representing a lot of different groups and campuses. It was just a really cool thing to see.”
Prior to meeting the Vice President, students took part in a session with staff from the American Council on Education, an organization devoted to influencing higher education public policy and fostering innovative, high-quality efforts to help colleges and universities best serve their students and their communities. The ACE staff coached students on how to effectively share their perspectives on public policy issues.
Carstens took away several ideas from the session that will assist her when she is employed in areas related to her field of study.
“I will get to see many types of characteristics in my lifetime in my work and I will have to advocate for individuals. I’ll be able to use this information for the rest of my life in my career.”
Both students also had some time to sightsee Washington D.C., including a night tour where they observed over two dozen historical monuments.
“It was just unreal to see all the monuments and statues in person instead of seeing them in movies and TV shows,” Carstens said. “It was right before my eyes – history right there!”
The entire experience of traveling to Washington to meet with the Vice President of the United State was an incredible opportunity for both students. Carstens is still processing having the chance to meet Harris.
“It was very interesting to hear everyone's perspectives as college students. It's just such an amazing opportunity to say I was at the White House, and I got to see the first female vice president. Not a lot of people get to say that.”
“It is still unbelievable to say that I got to sit a few feet away from our Vice President,” Stahl said. “It’s still something that's hard to wrap my head around.”
--###--
PHOTO IDs: Emily Carstens (left) and Hannah Stahl.