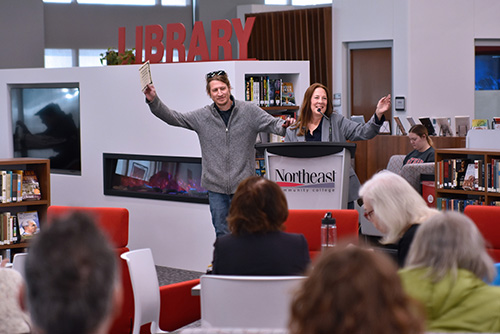 NORFOLK, Neb. – A event this fall celebrated the poetry and creative writing community in the state while at the same time recognized its roots that date back over 30-years. The two-day Nebraska Poetry Festival featured several well-known poets and writers who read from their works during separate events held on the campuses of Northeast Community College and Wayne State College (WSC).

Bonnie Johnson-Bartee, English instructor at Northeast, and Chad Christensen, professor of English at WSC, coordinated the event.
“It’s been over 30 years since the last Nebraska Poetry Festival, and we thought it was high time to have another, especially post-pandemic when people need to reconnect,” Johnson-Bartee said. “The planning and coordinating were considerable, but it was definitely worth it to see these amazing poets celebrating poetry face-to-face as a community again. It took a village to pull this off, and so many from Northeast and Wayne State pitched in to make this a memorable event. A special thank you to everyone who helped.”
Poets and writers who appeared at the Nebraska Poetry Festival included Lin Brummels, JV Brummels, Michael Catherwood, Chad Christensen, Twyla Hansen, Neil Harrison, Greg Kosmicki, Kiara Letcher, Stephanie Marcellus, Matt Mason, Holly Pelesky, Marjorie Saiser, Barbara Schmitz, Shyla Shehan, William Trowbridge, Lucy Adkins, Kelly Weber, Rich Wyatt, Scott Abels, and Johnson-Bartee.
Abels, English instructor at Northeast, read from his collection, New City (BlazeVOX) while Johnson-Bartee read from her works, including her new book, Cord Blood (Sandhills Press), which was released the day of the event at Northeast.

The origins of the Nebraska Poetry Festival date back to the 1980s beginning with the publication of the Elkhorn Review, a bi-annual newsprint collection of poetry, fiction and book reviews.
The first appearance of Elkhorn Review was in the winter of 1984, with editors Paul Shuttleworth, Barbara Schmitz, and Larry Holland, and journalism and English instructors at Northeast Technical Community College. In the years it was published, Elkhorn Review included works by some of Nebraska’s and the nation’s finest writers.
The initial issue included an advertisement for an Elkhorn Summer Creative Writing Camp, a week-long offering of “concentrated writing activity to include sessions with Nebraska writers and seminars on fiction and poetry writing, as well as three hours of college creative writing credit.” By June 1985, when it was scheduled to begin, it had evolved into the Elkhorn Writers’ Conference and Workshop, featuring JV
Brummels, William Kloefkorn, Amy Koch, and Schmitz.
Once initiated, The Elkhorn Writers’ Conference was held again in 1986, 1987, and 1988, partially supported by the Nebraska Arts Council. In Oct. 1986, the first Nebraska Poetry Festival, advertised in the Elkhorn Review as “The greatest poetry event in the state’s history,” was held. From Northeast, the festival moved onto Omaha, Lincoln, and the state colleges in Chadron, Kearney, Peru, and Wayne.
Neil Harrison, former English instructor at Northeast, said beginning with the Spring 1987 issue, the editors were listed as Holland and Schmitz during the time Northeast Technical Community College had become Northeast Community College. Though some changes were occurring, he said Elkhorn Review stayed in bi-annual publication for five-years.
“Although the publication ended with the Spring 1989 issue, the importance of Elkhorn Review to the early and ongoing evolution of creative writing in Nebraska cannot be denied,” Harrison said.
Hansen, who served as Nebraska State Poet from Dec. 2013-Jan.2019, was part of the group who read at the Nebraska Poetry Festival 36-years ago. She told attendees at the most recent affair that she was pleased to be part of the event.

“The real heroes were people like Kloefkorn, Brummels, and Schmitz, among all the ‘zillions’ of others. That was my introduction my very first reading in that series,” Hansen said. “I think it went on for several years because we held it at different places across Nebraska.”
After Northeast, the latest iteration of the Nebraska Poetry Festival moved to Wayne State College for a second day of readings. It concluded with a Poetry Slam that evening at The Max Bar and Grill.
“Chad and I are looking forward to having another festival soon; although, our next will likely be a Nebraska Fiction Festival as we would like to alternate it with poetry,” said Johnson-Bartee. “We want to do our part in keeping the vibrant writing of Nebraska at the forefront of the literary community, and we’re lucky to have such a large pool of talented writers in Nebraska to choose from.”
--###--
PHOTO CUTLINE
Chad Christensen, professor of English at Wayne State College (WSC), and Bonnie Johnson-Bartee, English instructor at Northeast Community College, welcome attendees to the Nebraska Poetry Festival in Northeast’s Union 73 recently. The event, which featured 20 poets and writers, moved to WSC the following day, and concluded with a poetry slam.