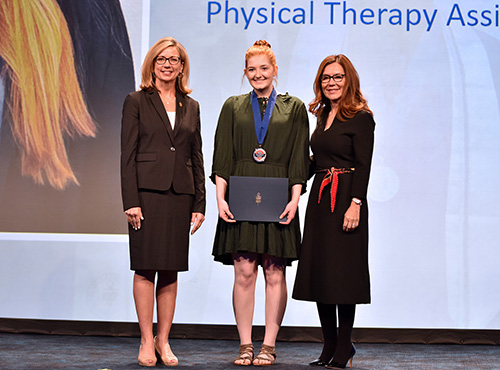 NEW YORK – A graduate of Northeast Community College has been recognized nationally for her work in and out of the classroom.

The international academic honor society Phi Theta Kappa (PTK) has awarded Kaitlyn Pongratz, O’Neill, with a 2022 New Century Workforce Scholarship. She was honored with other New Century scholars during the Association of Community College Trustees’ 2022 Leadership Congress recently in New York City.
The scholarship is the first of its kind to support students at associate degree-granting institutions on a national scale as they plan to enter the workforce upon the completion of a degree or certificate. The program is sponsored by The Coca-Cola Foundation, The Coca-Cola Scholars Foundation, the American Association of Community Colleges, and Phi Theta Kappa.
New Century Workforce Scholars are selected based on their academic accomplishments, leadership, activities, and how they extend their intellectual talents beyond the classroom. Over 2,200 students were nominated from more than 1,200 college campuses across the country. Only one New Century Workforce Scholar was selected from each state.
Pongratz graduated in August with an Associate of Applied Science degree in Physical Therapist Assistant who is presently employed as a PTA in an outpatient setting at Northeast Nebraska Physical Therapy in Norfolk. In college, she served as historian of the Physical Therapist Assistant Club and participated in programs and activities through PTK, the American Physical Therapy Association and the North Nebraska AHEC (Area Health Education Center) Scholars program.
“We congratulate Kaitlyn for receiving this prestigious scholarship, and we are honored to partner with The Coca-Cola Foundation to recognize her outstanding achievements,” said Dr. Lynn Tincher-Ladner, president and CEO of Phi Theta Kappa. “Scholarship programs like this are integral for creating opportunities for students to succeed as they prepare to enter the workforce and for putting college completion within reach.”
Pongratz is the third Northeast student to be named a New Century Scholar. Tait Ziems, Plainview, who graduated with an associate of applied science degree in automotive technology from Northeast, earned the same recognition in 2020. Preston Dickau, Atkinson, who graduated from Northeast in 2019 with a degree in auto body repair technology, also earned the New Century Scholar honor that same year as part of the first class that was awarded the scholarship.
Phi Theta Kappa is the premier honor society recognizing the academic achievement of students at associate degree-granting colleges and helping them to grow as scholars and leaders. The Society is made up of more than 3.8 million members and nearly 1,300 chapters in 11 countries, with approximately 240,000 active members in the nation’s colleges. Since the installation of Northeast’s Tau Chi chapter in 1996, over 3,400 students have been inducted into the international academic honor society for two-year colleges.
The Coca-Cola Foundation is the global philanthropic arm of The Coca-Cola Company. Since its inception in 1984, the Foundation has awarded more than $1 billion in grants to support sustainable community initiatives around the world.
Andrea Suhr, PTA instructor and a PTK sponsor at Northeast, accompanied Pongratz to New York City.
--###--
PHOTO CUTLINE

Northeast Community College graduate Kaitlyn Pongratz, O’Neill, (center) is awarded a Phi Theta Kappa (PTK) New Century Workforce Scholarship during a ceremony at the 2022 Association of Community College Trustees Leadership Congress recently in New York City. The scholarship is the first of its kind to support students at associate degree-granting institutions on a national scale as they plan to enter the workforce upon the completion of a degree or certificate. Only one New Century Workforce Scholar was selected from each state. Also pictured are Monica Marlowe, executive director of the PTK Foundation (left) and Alba Castillo Baylin, vice president of stakeholder and community relations for the Coca Cola Company, North America.