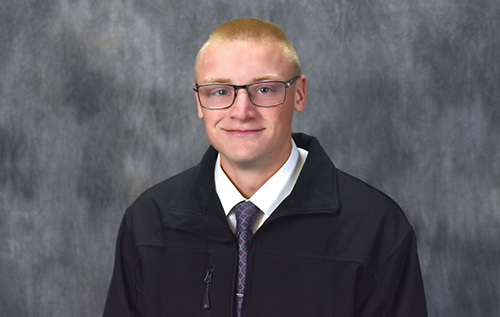 NORFOLK, Neb. – A Northeast Community College student is pursuing a degree in criminal justice to serve others and uphold the law in order to protect society.

Austin Jansen, Hartington, will complete his Associate of Arts degree in Criminal Justice, with a concentration in Law Enforcement, in Dec. 2023. After graduation, he has career aspirations of working as a police officer and then as a member of South Dakota Highway Patrol. Eventually, he would like to move up the ranks and become part the Special Weapons and Tactics (SWAT) Team for the state of South Dakota.
Jansen, the son of Cathy Jansen, Hartington, is a first-generation college student who understands the impact that higher education will have on him and his future. His instructors say his dedication in the classroom and his commitment to his academics shine through in everything he does.
Jansen has a strong support system that he has relied on and that has assisted him during his academic journey. He credits his older brother, Cody Jansen, as being the most influential and inspiring figure in his life.
“Cody has shown me what’s possible in life and what I can achieve if I want it,” he said. “We weren’t dealt the best hands in life, but Cody has played his very well and put himself in position to reach his dreams. He has shown me that I can achieve that for myself too.”
While at Northeast, Jansen has been an active member of the TRIO club as well as the Trap Club. He has been named to the President’s List every semester he has been enrolled and maintains a perfect 4.0 GPA.
TRIO is a federally funded program that assists income-eligible individuals, first-generation college students and those with disabilities to progress through the academic pipeline to post-baccalaureate programs. It also focuses on career exploration, cultural and social enrichment and self-awareness.
For his hard work and dedication to his education, Jansen was named the Northeast Community College TRIO Student of the Month for September. Each month, a participating TRIO student is selected for the award based upon their work in TRIO and in other activities on campus or in the community. Jansen and other TRIO Student of the Month award recipients receive a plaque and have their photo placed on the program’s Achievement Recognition board in the TRIO office, which features the theme, True Leaders.
“I have been so impressed with Austin’s progression and growth during his time here at Northeast. He came in during his first semester doubting himself and wondering if college was the right choice for him,” said Josh Becker, TRIO director at Northeast and Jansen’s advisor. “In that time, he has blossomed into such a positive and inspiring student and a role model for all our TRIO students. His self-confidence has grown immensely, and his skills and abilities continue to strengthen each semester. I am so proud of Austin, and I am very excited to see what is in store for him in the future.”
Jansen relies on his mother, three sisters and the friends he has made at Northeast for help and guidance, and who continue to support him on his educational path.
“They are people I can always count on,” he said.
Jansen also credits Becker with supporting him toward success.
“Josh helped me to become comfortable being here and stepping outside of my comfort zone. He encouraged me to get involved and use my resources, instead of hiding out and being left out.”
Jansen also has praise for Matt McCarthy, criminal justice program director and instructor, as an influential faculty member, saying that “He teaches us to be ourselves, and to think for ourselves.”
“Austin is a wonderful CJ student who possesses and demonstrates the qualities that are desired in the criminal justice field - intelligence, honesty, dedication, and perseverance. I am proud to have him as a CJ student.”