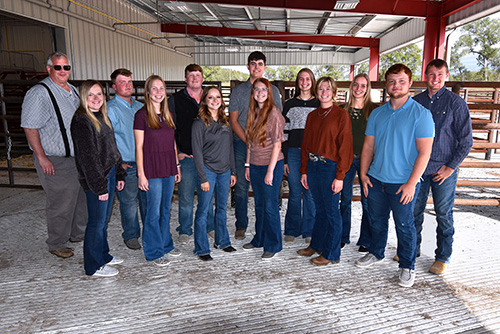 The team traveled to McPherson, Kan., for the Canton Galva Eagle Classic, where a total of 55 contestants participated. Brekyn Papineau, Marquette, was 7th in placings and 20th in cattle judging, while Alex Hinze, Columbus, was 16th in sheep and goat judging.
The team then competed at the Aksarben Stock Show - Livestock Judging Contest in Grand Island. Papineau was 20th in placings among the 88 contestants in the freshmen division.
“Brekyn had a good day marking cards in both contests of our opening weekend. He is seeing the livestock well at this point,” said Mike Roeber, livestock judging coach. “At the Canton Galva contest, he was competing against both sophomores and freshmen, and being a freshman and a top ten finish off the floor is quite an accomplishment.”
“Alex also had a good day at McPherson. She will continue to build on that as she participates in further contests this fall,” Roeber said.
Other Northeast contestants who participated in the opening weekend contests were Ethan Becker, Hartington; Natasha Dahlberg, Humphrey; Morgan Earl, Palmer; Lydia Fitzke, Glenvil; Collin Konecky, Ithaca; Haley Meduna, Colon; Evan Niemeier, Elwood; and Emily Plagman, Cumberland, Iowa.
In addition, the team traveled to Hutchinson, Kan., to participate in the Flint Hills Classic.
“Even though none of the team members ranked high at Hutchinson, it was still a learning experience for them that will help them as they continue the fall contest run,” Roeber said.
The Northeast contestants at the Flint Hills contest, in addition to those who competed the opening weekend, were Andrew Cone, Nickerson, and Keri Sanne, Norfolk.