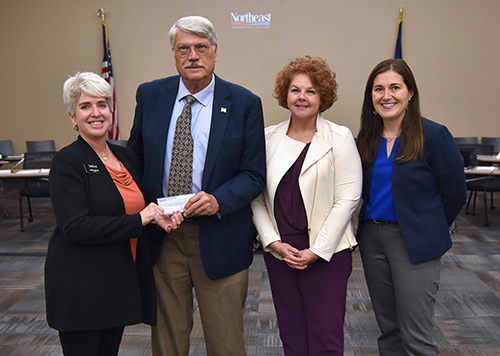 A check for $15,000 has been presented to Northeast Community College to assist students with scholarships from proceeds raised during the annual event. Dr. Leah Barrett, president of the college, and Julie Robinson, board of governor’s chairperson, accepted a check from representatives of NPPD at meeting of the board of governors Thursday in Norfolk.
The Nebraska Open is an annual golf tournament and fundraiser, coordinated by NPPD, that has helped raise more than $1.8 million in scholarship funds over the last 31 years. The scholarship funds support scholarships for students attending Central, Mid-Plains, Northeast, Southeast, and Western Nebraska community colleges. Northeast Community College has received over $371,000 in that time.
“The Nebraska Open has provided NPPD with a great avenue to support the students living and learning in the communities we serve,” said Christy Avery, NPPD communications specialist and Nebraska Open event coordinator. “Supporting local education is an important piece of supporting our local communities and the future of their workforce.”
Prior to presenting the check NPPD Board Member Bill Johnson, of Pilger, commended Nebraska’s community colleges for the work they do.
“NPPD utilizes community colleges to a great extent,” he said. “The (utility) lineman school (at Northeast) … is an integral part of training for our employees. You all do a great job representing community colleges.”
The Nebraska Open kicked off with an 18-hole Pro-Am event followed by a 54-hole professional tournament, endorsed and sponsored by the Nebraska Section of the PGA. The Nebraska Open, held in Columbus since its creation in 1991, concluded with an awards ceremony.
The 2022 tournament was sponsored by 42 businesses, whose donations help support the scholarships presented to students at 11 different campuses across the state. Wells Fargo returned as the title sponsor for the 19th consecutive year, along with national, regional, and Columbus-based sponsors such as Behlen Mfg. Co, Kelly Supply Co., and Nebraska Energy Federal Credit Union.
--###--
PHOTO CUTLINE
Representatives of the Nebraska Public Power District present a check for $15,000 to Northeast Community College officials. The scholarship funds come from proceeds from the 2022 Nebraska Open golf tournament, coordinated by NPPD. Wells Fargo is the title sponsor. Pictured (from left) are Dr. Leah Barrett, president of Northeast Community College, Bill Johnson, Pilger, NPPD board member, Brittney Koenig, NPPD account manager in Norfolk, and Julie Robinson, chair of the Northeast board of governors.