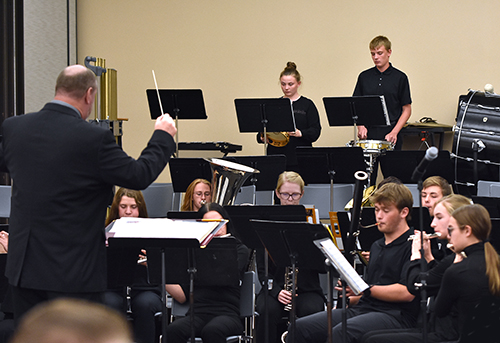 NORFOLK, Neb. – The region’s top high school musicians and vocalists had the opportunity to participate in an honors program earlier this week through Northeast Community College’s music department.

Eight-five students from 22 schools participated in the fourth annual Hawkfest, which included daylong rehearsals that were capped off by a public performance in the College’s Lifelong Learning Center. The 35-member honor band was under the direction of Kevin McLouth, director of instrumental activities at Northeast while the 50-member honor choir was led by Margaret Schultz, director of choral activities. Dr. Linda Boullion was accompanist.
Students earned entrance to Hawkfest through an audition process. McLouth and Schultz told the audience at the concert that they were pleased with how the students performed.
“This is a wonderful opportunity for them to get to know us, visit our campus and just have a great experience. It has been an awesome day today,” Schultz said. “I’m very proud of all of these students. They took music that they have not necessarily seen before, worked all day and now are presenting it to you in this concert.”
McLouth also credited high school music directors for preparing the students so they could be selected to participate in the honor band or choir.
“I want to thank the students for working so hard for us today,” he said. “I get to do the fun stuff … and we have a great day of making music. But the people ‘in the trenches,’ who work day in and day out helping these kids learn musical skills to do things like this, they’re the ones who really, really deserve applause.”
Participating high schools included Battle Creek, Boone Central, Cody-Kilgore, Creighton, Elkhorn Valley, Hartington-Newcastle, Lakeview, Madison, Newman Grove, O'Neill, Osmond, Pender, Plainview, Pierce, Ponca, Randolph, St. Edward, Stanton, Summerland, Winside, and Wynot.
Four high school seniors from each group were selected to receive $1,000 tuition waivers should they attend Northeast next year. Those receiving the waivers were band members Karen Alvarado-Mendez, of Ponca, and Grace Tibor, of St. Edward, and choir members Trenton Ditter, of Lakeview, and Audra Melcher, of Stanton.

The Northeast Media Arts - Broadcasting program recorded the event. It may be viewed on the Northeast You Tube Channel at https://www.youtube.com/watch?v=91WLzIVdGsQ

--###--
PHOTO CUTLINE
Kevin McLouth, director of instrumental activities at Northeast Community College, conducts members of the Hawkfest honor band during a public performance in the College’s Lifelong Learning Center. Eight-five students from 22 schools participated in the fourth annual event which included daylong rehearsals by the 35 members of the honor band and a 50-member choir that were capped off by the concert.