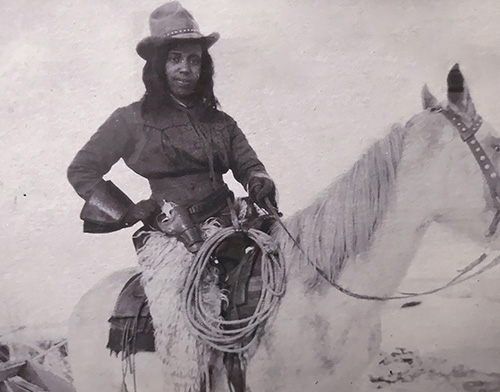 NORFOLK, Neb. – An exhibition that focuses on the largest black settlement in Nebraska is now on display at Northeast Community College in Norfolk. The exhibit, Descendants of DeWitty, features photos of residents and everyday life in settlement, which was located in Cherry County from 1907 – 1936.

Twelve families, after fleeing Canada to escape slavery, left their home in North Buston, Ontario in the early 1880s to journey to the Sandhills of Nebraska to settle as homesteaders. The settlers began to arrive in 1906-07, attracted by the 1904 Kincaid Act's offer of 640 acres of free land in the Sandhills. Spread out along the North Loup River, DeWitty, later known as Audacious, was the largest and longest-lasting African American settlement in rural Nebraska.
DeWitty included a church, store, barber, post office, and a baseball team, the North Loup Sluggers, which competed against teams from nearby communities. Three rural schools educated the children. On Independence Day, residents of DeWitty and nearby Brownlee would come together for a rodeo, baseball game and picnic.
A historical marker erected by the Nebraska State Historical Society, Cherry County Historical Society and Descendants of DeWitty in 2015 on Highway 83 tells the story of the settlement. The 1910 census recorded 82 residents. The number of occupied African American homesteads peaked in 1914, although some settlers had already or canceled or sold their claims and moved away. The black homesteaders, like their white counterparts, found 640 acres in the semi-arid region insufficient for ranching and marginal for farming. The last African American left the area in 1936. The last parcel still owned by DeWitty settler descendants was sold in 1993.
Pam Saalfeld, director of the center for global engagement at Northeast, said Descendants of DeWitty is a fascinating photo exhibit of little-known Nebraska and African American history.
“Northeast is so excited to host this exhibit on campus,” Saalfeld said. “It is a little-known, but significant, piece of Nebraska history. We are proud to be able to help bring this to people’s attention.”
The Descendants of DeWitty exhibit is on display in the upper level of Union 73 on Northeast’s Norfolk campus through Nov. 1 during regular business hours. It is free and open to the public.
To learn more about the DeWitty settlement, including a documentary on the settlement, visit descendantsofdewitty.org.

--###--
PHOTO CUTLINE
A photograph of Fernella C. Walker is featured in an exhibition now on display through Nov. 1 at Northeast Community College in Norfolk. The exhibit, Descendants of DeWitty, features photos of residents and everyday life in the largest black settlement in Nebraska, which was located in Cherry County in the Nebraska Sandhills region from 1907 – 1936. (Descendants of DeWitty)