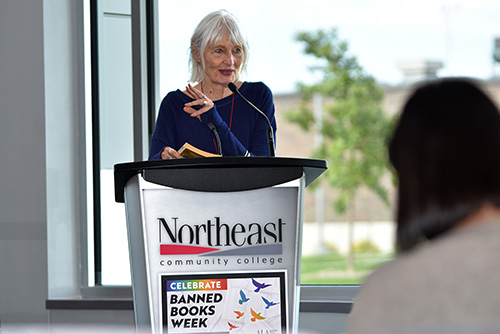 NORFOLK, Neb. – In 2021, the American Library Association (ALA) reported that 1,600 books were affected by censorship attempts. A majority of 729 challenges last year were over books, graphic novels and textbooks while others were concerned programs, displays and exhibits, and films.

The organization Banned Books Week Coalition is an international alliance of diverse organizations that are joined by a commitment to increase awareness of the annual celebration during the third week of September on the freedom to read. “Banned Books Week celebrates the freedom to read and spotlights current and historical attempts to censor books in libraries and schools,” as stated on the ALA’s Banned & Challenged Books website.
The Northeast Community College Library joined hundreds of other groups across the country to observe the week with a special event on the Norfolk campus with a Readers’ Karaoke. Jennifer Ippensen, director of library services, said the event allowed anyone the opportunity to read and have others listen to short excerpts from frequently challenged books.
“Recently, we have seen an unprecedented assault on the freedom to read and it has been escalating. In 2021, the American Library Association recorded the most attempts to ban books since they began tracking challenges more than 20 years ago,” Ippensen said. “These attempts are in the news every day. Still, as the ALA Freedom to Read Statement indicates, ‘free communication is essential to the preservation of a free society and a creative culture.’”
The theme for Banned Books Week 2022 is "Books Unite Us. Censorship Divides Us." The ALA said that books reach across boundaries and build connections between readers. “Censorship, on the other hand, creates barriers. Banned Books Week is both a reminder of the unifying power of stories and the divisiveness of censorship, and a call to action for readers across the country to push back against censorship attempts in their communities,” according to the ALA Banned & Challenged Books website.
“This is a dangerous time for readers and the public servants who provide access to reading materials,” said Deborah Caldwell-Stone, director of the ALA’s office for intellectual freedom.” Readers, particularly students, are losing access to critical information, and librarians and teachers are under attack for doing their jobs.”
Titles of the Top 10 books that had the most challenges in 2021 were on display inside Northeast’s Union 73 throughout the week.
“Banned Books Week is more important than ever. We must continue to raise awareness about threats to intellectual freedom, stand up against censorship, and protect our freedom to read,” Ippensen said.

PHOTO CUTLINE
Barbara Schmitz, former English instructor at Northeast Community College, speaks during a Readers’ Karaoke event during the College’s observance of Banned Books Week recently. The event during the third week of September allowed anyone the opportunity to read and have others listen to short excerpts from frequently challenged books.