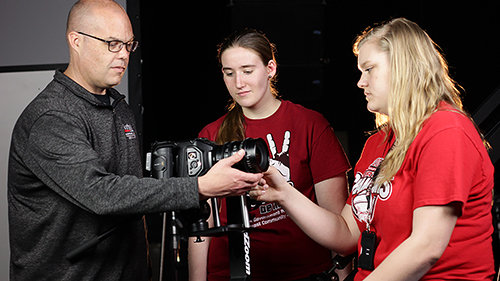 WASHINGTON – An instructor at Northeast Community College has been named one of the top community college faculty members in North America.

Media Arts – Broadcasting Instructor Brian Anderson is the recipient of the 2022 Association of Community College Trustees (ACCT) Western Region Faculty Member Award. He is one of five regional faculty members from two-year colleges to be recognized. ACCT’s western region covers 10 states and five Canadian provinces and territories. Geographically, it is the largest of ACCT’s five regions across North America.
In addition to faculty members, ACCT annually presents regional awards recognizing community college trustees (board members), chief executive officers (CEO), equity programs, and professional board staff members. ACCT's Regional Awards identify the tremendous contributions made by community colleges and their leaders to meet the needs of their communities.
"Community colleges are unique institutions dedicated to making high-quality higher education accessible for all Americans," said ACCT President and CEO Jee Hang Lee. "This year's regional ACCT awardees represent the most outstanding people and programs from throughout the country, and we are excited to be able to bring attention to them."
Julie Robinson, Norfolk, chair of the Northeast Community College Board of Governors, nominated Anderson for the Faculty Member award. She describes him as consummate educator who provides his students with the professional skills to work in the broadcasting, digital and media arts industries.
“With 25+ years of professional experience, Brian incorporates the latest technology and standards into his instruction inside and outside the classroom. He has established a program that also showcases Northeast across its 20-county service area that includes providing live broadcasts of events such as commencement and athletic contests, to relationships with area commercial broadcasters in providing them video and audio content. Brian is well suited to operate a successful program training the next generation of broadcasters because he has lived it. We are most proud of him as he earns this distinguished recognition.”
Anderson’s program serves as a pipeline in providing graduates to assist in filling their workforce demands.  In addition, he is actively involved in the Nebraska and national SkillsUSA organizations. Several of his students have gone on to earn state and national championships at Skills USA competitions.
As an instructor, Anderson, originally from Laurel, also has a close relationship with the Nebraska Broadcasters Association (NBA) – the preeminent organization of the state’s broadcasters.
This affiliation has allowed his students to network with professionals and industry representatives, balancing his classroom instruction. His students have also earned esteemed recognition by the NBA for their work. He is also a certified Federal Aviation Administration (FAA) drone pilot, which allows him to teach FAA rules and regulation courses to students and the public related to the rising industry.
In 2021, Anderson was bestowed with the Nebraska Community College Association’s Faculty Member Award, which is presented to one faculty member each year from five of the state’s community colleges.
Anderson and the four other regional award recipients will contend for national level recognition with the 2022 William H. Meardy Faculty Award. The award will be presented during the 53rd Annual ACCT Leadership Congress in October in New York, NY.
This is the seventh regional ACCT regional award that has been presented to a representative of Northeast Community College in the past several years. Michael Roeber, agriculture instructor/livestock judging coach, was recognized with the Western Region Faculty Member Award in 2019. Steve Anderson, Concord, received the trustee leadership award and Diane Reikofski, executive assistant to the president, was presented the board professional staff member award in 2018, and former president Dr. Michael Chipps earned the CEO award in 2017. The late John Davies, Pilger, was recognized with the trustee leadership award in 2015.

Brian Anderson, media arts – broadcasting instructor at Northeast Community College, (left) works with students in the Broadcasting studio on the Norfolk campus. The Association of Community College Trustees (ACCT) has named Anderson as its Western Region Faculty Award recipient. He is one of five regional faculty members from two-year colleges across North America who will be recognized at the ACCT Leadership Congress in October in New York.