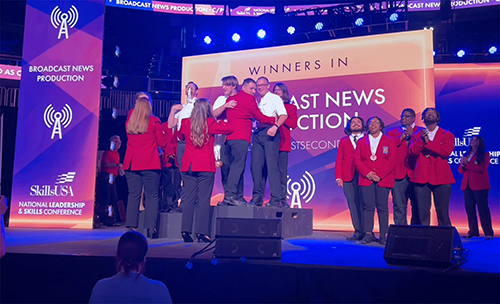 ATLANTA, Ga – Students in one program sat Northeast Community College have earned another national championship while others won silver and bronze medals in competitions that showcase the workforce knowledge they have gained through their education.

The Media Arts – Broadcasting team captured the gold medal in their respective class during the 2022 SkillsUSA National Leadership Conference recently. In the competitions, students in skilled and technical education science work against the clock and each other, proving their expertise in a myriad of occupations. The philosophy of the SkillsUSA championships is to reward students for excellence, to involve industry in directly evaluating student performance and to keep training relevant to employers' needs.
Broadcasting students Ervin Dohmen, Elgin, Alexander Kasten, Brandon, So. Dak., Conner Luebbe, Garland, Zane Thompson, Anselmo took the first-place gold medal in the collegiate Broadcast News Production category. It is the third national championship earned by Northeast Broadcasting in this category. The program also won the top prize in the 2021 and 2018 national Skills USA competitions.
In the contest, four-member teams have two hours to write and produce their rundown before the assigned contest time. Two students serve as the news anchor team, one student serves as the team’s director/technical director, and one student is the floor director. Teams then produces and completed a three-minute newscast as if it were live. Teams are evaluated on their broadcast writing ability, voice quality, diction, timing and pacing and performance techniques.
Brian Anderson, instructor of media arts – broadcasting at Northeast, said his students’ performance is a true testament to the work they do in their Media Arts classrooms and labs.
“We had a team member drop out just two weeks before the competition. In a short amount of time, we had to make a substitution and plan for a rehearsal before we left for the contest,” he said. “These students pulled together, put the hammer down and really got the job done! This is a true showing of their skills. I'm so proud of them."
The gold medal winning performance at the national competition is the third in four years for Northeast Broadcasting. It is a competition they don’t take for granted.
"To earn a national championship in any area is big deal. There's no one else in the country that can claim the title you hold,” Anderson said. “It represents excellence, hard work, determination, motivation, good work ethic and an intense understanding of the subject area. This is part of the framework of SkillsUSA, and this is what this contest and experience is all about."
In addition, eleven Northeast students medaled in other categories at the national event.