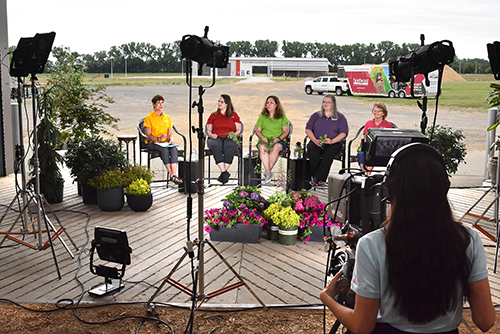 NORFOLK, Neb. – Over 200 people attended a taping of a popular television program Tuesday evening at Northeast Community College in Norfolk.

Nebraska Public Media (NPM) brought its Backyard Farmer program to the College’s Chuck M. Pohlman Agriculture Complex to answer questions from audience members and others about plants, flowers, trees, and lawns among other topics. The show was originally scheduled to be taped on the lawn outside the College’s Lifelong Learning Center, but plans changed with the forecast of rain in the region.
“While we would have loved to be outside, Mother Nature had other plans and it still turned out great,” said Jill Heemstra, agriculture program director at Northeast. “Show host Kim Todd and producer Brock Lohr both said that because of a great Northeast site team and the amazing crowd, they are definitely going to come back again.”
Backyard Farmer is broadcast live from the Lincoln studios of NPM Thursday evenings through September, but approximately three times a year, the show is taped at a remote location. To the best of anyone’s knowledge, Tuesday’s taping at Northeast was the first time it has ever originated in Norfolk.
The program included a pre-taped 30-minute question-and-answer session that allowed audience members to ask questions of the panel that featured Kaitlin Chapman, Nebraska Extension entomologist; Amy Timmerman, Nebraska Extension plant pathologist; Terri James, Nebraska Extension educator and Kelly Feehan, Nebraska Extension Educator – Platte County. It was the first time that an all-female panel had been featured in the program’s nearly 70-years.
In addition to the program taped at Northeast, several pre-produced features are included in the broadcast that highlight Northeast staff who are active participants in local farmers’ markets.
One segment will be about sisters Stacy and Sandy Dieckman. Stacy Dieckman is the director of financial aid at Northeast. Sandy Dieckman teaches math at Norfolk Senior High and has been an adjunct faculty member at Northeast for approximately 20 years. Both are actively involved in the Norfolk Farmer’s Market, which Sandy currently manages.
Another segment features North Fork Bread Co., which began selling bread at the Farmers’ Market and now has a stand-alone retail store on Benjamin Ave. The store is owned by Caleb Nihira, a former music educator, and Jody Gibson, the director of institutional research and analytics at Northeast.
The Q & A portion of the program will air on social media next week. The one-hour taping of Backyard Farmer that was held following the Q & A will first air Thursday at 7 p.m. on Nebraska Public Media. In northeast Nebraska, Backyard Farmer airs on Channel 19, KXNE-TV. The program will repeat at 10 a.m. on Saturday on NPM and at 4 p.m. Sunday and 5 p.m. Monday on Create TV.
Backyard Farmer claims to be “the longest running locally produced program in television history.” It first aired in 1953 on KFOR-TV, moving to KUON-TV, Nebraska educational television’s flagship station, a year later. In the 1960s, Backyard Farmer had the highest rating of any educational broadcast in the United States.
“We are so appreciative of such a large crowd coming out to Northeast to attend the Backyard Farmer program taping,” Heemstra said. “It really turned out to be a great evening for everyone.”
--###--
PHOTO CUTLINE
Nebraska Public Media (NPM) brought its Backyard Farmer program to Northeast Community College’s Chuck M. Pohlman Agriculture Complex Tuesday evening. The show will first air on NPM on Thursday at 7 p.m. Pictured (from left) are Kim Todd, show host, Kaitlin Chapman, Nebraska Extension entomologist; Terri James, Nebraska Extension educator, Amy Timmerman, Nebraska Extension plant pathologist; and Kelly Feehan, Nebraska Extension Educator – Platte County.