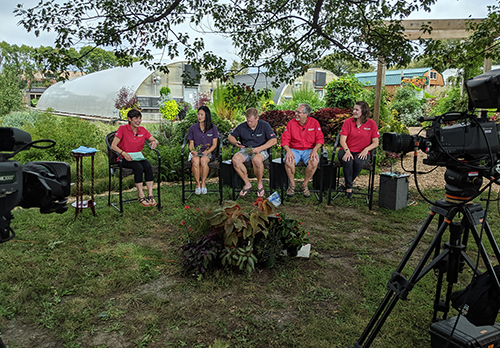 The show will be taped beginning at 6 p.m. inside the Chuck M. Pohlman Agriculture Complex. A question-and-answer session will be held from 5:15 – 5:45, according to the program host, Kim Todd.
“People can bring samples if they want to and stand up and ask their question, or they can also put the question on a small card and hand it up,” Todd said. “I try to mix the questions up, so they aren’t all on one subject. And if we don’t get to all the questions, the audience can meet with the panelists after we finish taping.”
“Questions for the show itself come to me in the BYF inbox,” Todd explained, “and I will have sorted them and sent the pictures to Nebraska Public Media a few days before so they can be preloaded.”
Todd, an associate professor at the University of Nebraska-Lincoln (UNL) and extension horticulture specialist, has been hosting Backyard Farmer for 18 years. She believes the Norfolk show will be unique for two reasons. Backyard Farmer is usually taped live in the Lincoln studios of NPM, but approximately three times a year, the show is taped at a remote location. To the best of anyone’s knowledge, the June 7 show at Northeast will be the first time the show has ever originated in Norfolk.
Todd said the panel for this show - Kaitlin Chapman, Nebraska Extension entomologist; Amy Timmerman, Nebraska Extension plant pathologist; Terri James, Nebraska Extension educator and Kelly Feehan, Nebraska Extension Educator – Platte County – is also a first.
“That’s the first time in Backyard Farmer history for an all-female panel,” Todd said.
Each panelist will be assigned to one of four topic chairs.
“In order of the way they sit, the chairs are entomology, or the bug chair,” Todd said. “Then turf and weeds, then pathology that we call ‘rots and spots,’ and then horticulture that covers everything from growing vegetables to trees.”
Feehan will be in the horticulture chair. She already has some idea of the questions she will be asked.
“Winter and drought related questions are our most common right now,” Feehan said. “Things like winter desiccation and winter injury on plants, not because it was so cold, but because we had such extremes.”
Feehan encourages audience members to bring their concerns to the question-and-answer portion that begins at 5:15. And she said it is important to bring a sample or a photograph.
“If it’s a tree or shrub, maybe bring a branch that has a number of leaves on it,” she said. “Pictures are great, too, especially a picture that shows the whole plant so we can see the pattern of the problem.”
Dr. Trentee Bush, horticulture instructor at Northeast, said the idea of bringing Backyard Farmer to the Norfolk campus was first discussed in 2019, but the COVID pandemic put off any plans for remote broadcasts.
“I studied horticulture in undergraduate and grad school at UNL,” Bush said, “Backyard Farmer was always on my radar, and I know a lot of the panelists. Kim Todd, the host, was my graduate advisor.”
Jill Heemstra, Northeast ag program director, is coordinating logistics for the event.
“Having an event like this involves a lot of communication and a lot of people all pulling in the same direction,” Heemstra said. “When you get down to the brass tacks, you have to think about access to electricity, the possible noise level, where will the sun be at that time of day, what is something scenic in the background.“
Heemstra said visitors will not be able to turn left toward the Lifelong Learning Center, 601 E. Benjamin Ave., after entering from the main college entrance on Benjamin Ave. The best option for parking for those attending the Backyard Farmer taping will be in the Maclay building parking lot. Parking will also be available in the Lifelong Learning Center or Cox Activities Center parking lots. Guests wishing to park there will need to either enter campus through the west entrance off Benjamin Ave., or use the main entrance, turn right, and drive completely around the loop road. Signs will help direct traffic on June 7.
Heemstra said hosting Backyard Farmer on the Northeast campus is a great opportunity for the local community and for the College.
“You don’t have to talk to very many people in Nebraska before you find somebody who knows about Backyard Farmer and watches the program,” she said.
Backyard Farmer claims to be “the longest running locally produced program in television history.” It first aired in 1953 on KFOR-TV, moving to KUON-TV, Nebraska educational television’s flagship station, a year later. In the 1960s, Backyard Farmer had the highest rating of any educational broadcast in the United States.
“Backyard Farmer” airs Thursdays at 7 p.m. through September. It repeats at 10 a.m. on Saturdays on Nebraska Public Media and at 4 p.m. Sundays and 5 p.m. Mondays on Create TV.
--###--
PHOTO CUTLINE

Pictured is a scene from a previous episode of Nebraska Public Media’s (NPM) “Backyard Farmer” program. The popular program, dedicated to helping find solutions to lawn and garden questions, will tape a broadcast on the front lawn of the Northeast Community College campus in Norfolk on Tue., June 7. The public is encouraged to attend the 6 p.m. taping and a question-and-answer session from 5:15-5:45 p.m. The program will be aired June 9 at 7 p.m. and June 11 at 10 a.m., on NPM. It also airs at 4 p.m. Sundays and 5 p.m. Mondays on Create TV. (Nebraska Public Media)