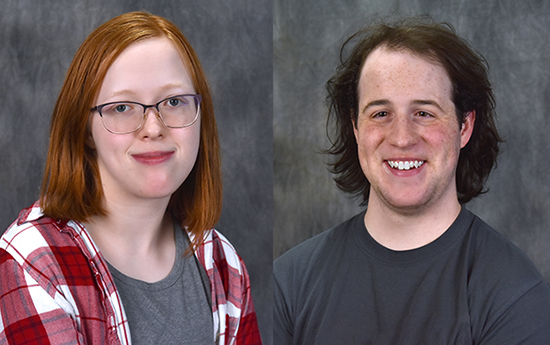 NORFOLK, Neb. – Two Northeast Community College students have been recognized at the regional level for their work on a college theatrical production.

Courtney Ullarich, Norfolk, received a “Commendation for Achievement in Costume Design” and Nolan Whitney, Seward, received a “Commendation for Achievement in Lighting Design” through the Region 5 Kennedy Center American College Theatre Festival (KCACTF).
Ullarich and Whitney were recognized for their work on the Northeast Players’ 2021 production of Taxi Cabaret. The production follows six people in their twenties during their first year in New York City.
The designs of Ullarich and Whitney were in connection with a Play Production course, where students learn the fundamentals of theatrical design and then apply them to a real-world project.
“Your hard work and commitment to artistry is celebrated,” said Brad Carlson, Region 5 Chair, in awarding the commendations to the students. “In Region 5, we have incredible talent and dedication to the craft of theatre. Your work demonstrated that commitment and we celebrate you.”
Roger L. Stevens, the Kennedy Center's founding chairman, began the theatre festival in 1969. KCACTF is a national theater program involving 18,000 students from colleges and universities nationwide which has served as a catalyst in improving the quality of college theatre in the United States.
The event has grown into a network of more than 600 academic institutions throughout the country, where theater departments and student artists showcase their work and receive outside assessment by KCACTF respondents.
--###--
PHOTO ID: Courtney Ullarich (left) and Nolan Whitney.