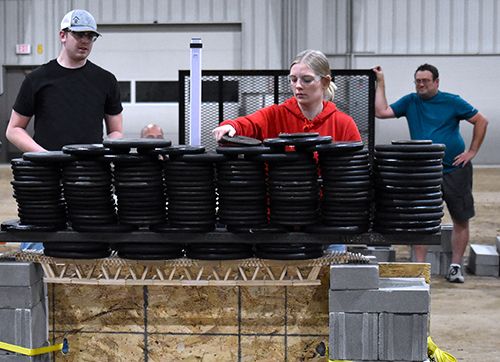 NORFOLK, Neb. – A 19th century suspension bridge spanning the East River from Brooklyn to Manhattan in New York City is a well-known landmark. The Brooklyn Bridge was the first to use steel wire for its cables. Another bridge that bears the same name, but is much, much smaller and considerably more lightweight is making its own mark after a competition held at Northeast Community College recently.

Brooke Mewis was one of six Northeast drafting students to take part in the program’s popular Bridge Builders competition. Her 4.13 lbs. bridge held 2,045 lbs. of free weights and an eight-foot steel channel, or 422 times its weight before collapsing into a pile of rubble during the event held in the College’s Chuck M. Pohlman Agriculture Complex.
In addition to capturing the top spot in the friendly competition, Mewis, Madison, earned the fourth position on the competition’s all-time Top 20 list. The record is held by Tyler Stubben, whose 3.40 lbs. bridge held 765.5 times its weight, balancing 2,607 lbs. in 2019. Stubben was on hand for the competition and awarded Mewis her prize - $100 and a certificate from the Nucor Detailing Center (NDC), which awards the overall winner from the competition each year. Stubben is employed by NDC.
Two other students earned the right to position themselves on the All-Time Top 20. “Briggs Bridge,” constructed by Curtis Briggs, Columbus, held 1,000 lbs., 300 times its 3.53 lbs. weight. That put him at eighth on the list. “Sir Holds a Lot,” a 5.67 lbs. structure constructed by Kevin Pearson, Norfolk, held 1,565 lbs. or 289 times its weight. He’s ninth on the Top 20 list.
Other students competing were Jayce Johnson, West Point, Samantha Lockhart, Fremont, and Randell Lockhart, Wayne. Johnson’s bridge held 735 lbs. or 229 times its weight, Samantha Lockhart’s structure held 450 lbs. or 185 times its weight and Randell Lockhart’s bridge held 200 lbs. or 82 times its weight.
The 11th annual competition is designed to demonstrate the structural integrity and structural concentration of the bridges the students spend weeks and months constructing. The competition, organized by Michael Holcomb, Northeast structural CAD (computer aided design)/drafting instructor, is held at the conclusion of the academic year each May. He said he appreciates NDC’s involvement in the competition as it gives students an added incentive to excel.
“This is one of my most favorite events of the year. I really look forward to it and most people who experience it for the first time are amazed at how exciting it can be,” Holcomb said. “This year’s class did an exceptional job. The worst placement exceeds the goal of the assignment by double, which people may think means the goal is set too low, but as past competitors may tell you it takes a very good bridge just to meet the goal.”
Brian Anderson, media arts – broadcasting instructor, and his student Conner Luebbe, Garland, livestreamed the event from the Ag Complex. The program may be viewed anytime at team1sports.com/northeastcc/ or on Northeast’s You Tube page at youtube.com/watch?v=pFLrqmklnao.
--###--
PHOTO CUTLINE

Northeast Community College drafting student Brook Mewis, Madison, places weight on her popsicle stick-built bridge moments before it collapses under the weight of 2,045 lbs. Her “Brooklyn Bridge” held 422 times its weight in winning the annual Bridge Builders event. She also earned fourth place on the competition’s all-time Top 20 list. The drafting program competition is designed to demonstrate the structural integrity and structural concentration of the bridges the students spend weeks and months constructing.