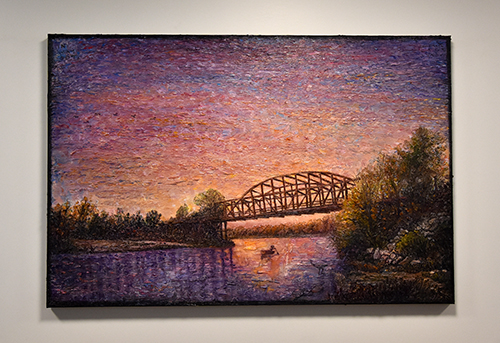 NORFOLK, Neb. – A new painting by an art instructor at Northeast Community College was inspired by the work of gifted editorial cartoon creators and a great painter who lived over 350 years ago, among others.

Michael Lynch’s painting, In Way Out, reflects the history and the spirit of the Elkhorn Valley and is permanently on display inside the front entrance of the Norfolk Public Library, 308 W. Prospect Ave. The painting of Broken Bridge over the Elkhorn River southwest of Norfolk is the first piece of original artwork that was commissioned by the Norfolk Public Library Foundation to beautify space in the library and support local artists.
During a dedication and reception at the library recently, Lynch said the Elkhorn Valley covers a large region, which was a challenge in producing an idea for an original piece of artwork. But after thinking about it, one thing kept coming to him.
“I kept going back to the term ‘Elkhorn Valley.’ And so the first thing that comes to my mind many times is the river,” Lynch said. “I love walking down by the river and being on the river. And so that's what went into my head when I started thinking about putting this proposal together.”
Lynch then went to the Elkhorn Valley Museum and found a treasure trove of information on a long-ago historian that helped him continue to form an idea for his painting. The work of Cora Beels spoke of Native Americans and in later years, settlers who came to the region. The river was a focal point in how they lived and worked.
Lynch enjoys spending time kayaking along the river and hiking the adjacent Cowboy Trail.
“That’s what popped into my head when I thought about the whole proposal. I especially like walking out to Broken Bridge and always thought that is really a beautiful area outside of town. And so this bridge had gotten into my head since I have been out there and I have painted out there a few times, too.”
Lynch looked at the scene with a metaphorical vision to capture the spirit of the Elkhorn Valley as the Library Foundation Board had requested. He decided to use a figurative style rather than a more literal representation. He was familiar with the area since he has used the bridge in other works he painted on site.
In those instances, Lynch painted from direct observation over a one-to-two-hour time period. In In Way Out, he used a style that gives the painting a heavier appearance as the paint is raised on the canvas.
“I just paint with straight paint. So it’s thick paint called ‘impasto.’ I usually do it in a couple of quick sessions with the thick impasto paint and a palette knife.”
His influences are reflected in the impasto style. These include early 20th century American cartoonist Jay Norwood “Ding” Darling, mid-20th century cartoonist Frank Miller, both of whom worked for the Des Moines Register, one of his college professors, George Rose, and George Herman, who drew the cartoon, Crazy Cat. Lynch said it was the effect of the use heavy black line and color techniques they all used or spoke of that he likes to incorporate in his style of impasto.
He kept going out to Broken Bridge and took photographs at various times of day to look at the effects of the light on the sky, on the water and on the bridge. This also allowed him to look again at the painting on a metaphorical level to include aspects of Native Americans, settlers and nature.
As the viewer looks at the painting, symbols around the bridge include a human in a bull boat used by Native Americans; animals such as deer, geese, a bald eagle, a heron, redwing blackbirds, a muskrat, and turtles; the moon; the painting’s title; and Lynch’s signature.
“(The symbols) all seem to be pretty endearing themes that I thought would make sense with a painting about this region,” Lynch said.
Each item takes time to locate; Lynch painted them with light strokes, so they are somewhat hidden.
Once he finished with placing the symbols in the painting, he looked at it again and began to think of another person he has long admired. That influence is the Dutch Golden Age painter, Rembrandt, who also used the impasto style to achieve the shadowing effect that is recognized in his work.
“If you ever look up one of (Rembrandt’s) paintings up close, you see impasto on there. It's all thick and lumpy looking and sculpted,” he said. “And then he would glaze over that and sink the glaze into the recessed areas. He would wipe it off the raised areas and leave it in the recessed areas. It just makes a more dramatic impasto surface. And it really makes the dark areas darker, richer and deeper.”
Lynch does not typically use glaze, but on this project, he thought it should be absorbed into the finished painting.
“So now I am thinking about all my heroes - Frank Miller, “Ding” Darling, George Rose, George Herman and Rembrandt. But once I put the black line in, it still didn't seem quite right; it seemed too bright. When you put black around it, color tends to make it look lighter and brighter. And so I started messing with it, of course, and I started thinking about Rembrandt. And so I started glazing over it.”
Lynch used only linseed oil and dark colors to glaze over it in certain areas. He placed the glaze on the canvas rather quickly and then immediately wiped it off, which created a deeper and richer look to the painting.
Lynch said the entire project took some surprising turns for him, but he found it enjoyable.
“The whole project was interesting because I did things I typically do, but I did a few things I don’t typically do, so that was exciting for me. I really appreciate the library letting me be part of this.”
--###--