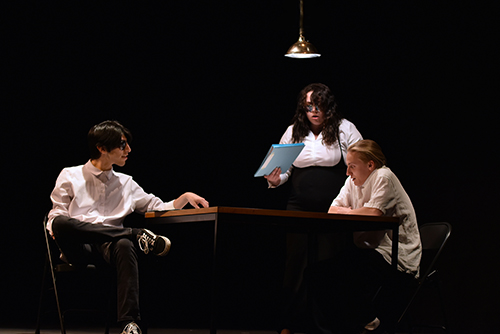 NORFOLK, Neb. – The Theatre Dept. at Northeast Community College is ready to take audiences on a wild journey. The play Crazytown, written by Jonathan Rand, will be performed the first weekend in May at the College’s Cox Activities Center Theatre on the Norfolk campus.

Director Adam Peterson said Crazytown is a silly production featuring a talented cast and crew.
“We want everyone to come out to take a tour of the most messed up town in America. From the police interrogation room where the nicest guy in town is issued a strange ultimatum to the elementary school for a heated debate on issues like tater tots, it will certainly be a hilarious evening,” he said. “Afterall, the town motto is ‘Welcome to Crazytown.’”
Rand is among the most popular contemporary playwrights writing today. His plays having been performed over 26,000 times in theaters across sixty-seven countries. According to an independent survey of American schools, his one-act comedy, Check Please, was the #1 most-produced short play every season for the last 17 years.
Rand also served as CEO and co-founder of Playscripts, a publishing and performance licensing company for new stage plays and musicals, serving tens of thousands of theater groups with an exclusive catalog of over 2,700 titles by over 1,500 writers.
The cast and crew of the Northeast production of Crazytown includes Kirsten Bischoff, Cook; Elise Fjell, Stromsburg; Beau Hahn, Spalding; Jonathan Hernandez, Madison; Destiny Holland, Norfolk; Ethan McCorkle-Dietrek, Colorado Springs, Colo.; Claire Thompson, Norfolk; Courtney Ullarich, Norfolk; William Vuchetich, Norfolk; and Nolan Whitney, Seward.
Performances are Thurs.-Sat., May 5, 6, and 7, at 7:30 p.m., and Sun., May 8, at 2 p.m. Admission is $5 for students and $10 for adults. Anyone with a valid Northeast Community College ID is admitted free!
--###--
PHOTO CUTLINE
Northeast Community College students Jonathan Hernandez, Madison (left) Elise Fjell, Stromsburg, and Beau Hahn, Spalding, rehearse a scene from the play Crazytown. The comedy, written by Jonathan Rand, will be performed May 5-8, on the College’s Cox Activities Center Theatre stage on the Norfolk campus.