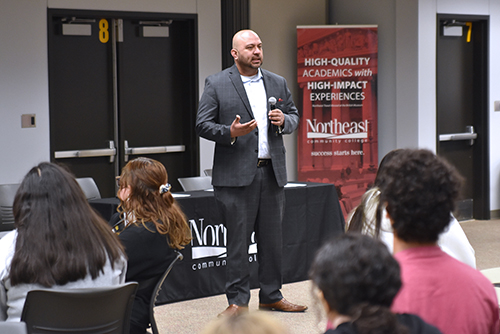 SOUTH SIOUX CITY, Neb. – Earning a college education was not easy for Ruben Cano, but he’s glad he didn’t give up. Cano, principal of Thomas Jefferson High School in Council Bluffs, Iowa, was among those to share their stories at the annual Latino Youth Summit at Northeast Community College in South Sioux City recently.

High school sophomores, juniors and seniors from across the region joined with one another to be motivated about lessons in life and to learn more about higher education opportunities. The day included a mix of information in English and Spanish as several ELL (English language learners) students attended the event.
Cano’s personal story includes encounters with gangs, drugs, and teenage pregnancy. He said overcoming those obstacles and focusing on his college education has allowed him to be where he is today. He told the students that their parents and his parents have sacrificed to allow them to pursue opportunities that can lead to good lives and to be successful. That was evident after he landed his first job as a schoolteacher where he earned more money that first year than his father did after working 20-years as a mechanic.
“That has opened doors for me, and it has opened doors for my kids,” Cano said.
It took Cano six-years to complete his college education because it was challenging for him.
“It was hard. I didn’t know how to be a student. I didn’t know how to study. And so it was tough, but I’m glad that I persevered. And a lot of that I learned from my parents. They never let me give up.”
Cano went on to earn a master’s degree that led to him to serve as principal of South High School in Omaha and now at Thomas Jefferson.
“That happened because of my education - and education that is available to all of you.”
Also addressing the students was Blanca Ramirez-Salazar, former partnership specialist and partnership coordinator for the U.S. Census Bureau 12-state Denver Region. She earned a Bachelor of Science degree in Social Work from the University of Nebraska-Omaha and a masters in Community & Regional Planning from the University of Nebraska-Lincoln.
Her passion is working on research and community efforts where she can use her bilingual (Spanish-English) skills. Ramirez-Salazar has worked in areas of civil rights, public health planning with Tribal communities, and on the 2010 and 2020 censuses. As an independent consultant, her focus is on community research efforts with an emphasis on immigrants, refugees and communities of color.
Also during the summit, $1,000 tuition scholarships to Northeast Community College were awarded to seven seniors. The students were selected through a random drawing.
The approximately 70 students from East, North and West high schools in Sioux City and South Sioux City and Wakefield high schools also heard from a panel of current students and graduates of Northeast Community College, and a panel of business professionals who spoke about breaking barriers and how they achieved their success.
In welcoming the students to the summit, Dr. Leah Barrett, president of Northeast, told them they would hear from students and professionals who have had college experience that served as a difference maker for them.
“Listen to them and ask them questions and put yourself in their shoes,” Barrett said. “Ask them the questions they were thinking of when they were 16, 17 and 18. Ask them the question, ‘What would they do different?’ Ask how their fire was lit to know that college was going to be effective for them and their families.”
Barrett said she was pleased the students participated in such an event that allowed them to think about their future and how college can put them on a pathway to reach their potential and to create success for themselves and their families - and their families of tomorrow.
She also encouraged the students to take dual credit classes. She said 85% of high school students who enroll in a dual credit class go to college.
“It’s a preview of having an opportunity to make those career choices. College allows you more opportunities in your life to do what you want to do. To dream and meet those dreams,” she said. “And it might take you a year or two at Northeast or it might take you from Northeast to one of our colleagues at colleges and universities in the Siouxland region - or maybe Stanford or MIT. The opportunities are endless when you take that first step to make a college choice.”
The summit also included performances by members of Ballet Folklorico Estrellas de Jalisco. The group, organized by Rosa Loza, dances at various events across the region.
--###--
PHOTO CUTLINE

Ruben Cano, principal at Thomas Jefferson High School in Council Bluffs, Iowa, speaks during a Latino Youth Summit at Northeast Community College in South Sioux City recently. The approximately 70 students from East, North and West high schools in Sioux City and South Sioux City and Wakefield high schools also heard from a panel of current students and graduates of Northeast and a panel of business professionals who spoke about how breaking barriers were possible and how they achieved it.