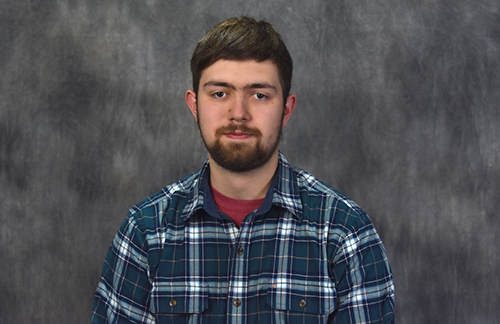 NORFOLK, Neb. - From a young age, Jesse Gerdes has always been passionate about trucks, especially agriculture-related diesel vehicles. Now as a young man, an appetite for the industry has led him to seek not one but two degrees from Northeast Community College to pursue a path that would allow him to achieve his goal – become the lead service tech at his current employer in his hometown of Seward. He also hopes to take over the family farm one day.

Gerdes credits his Diesel Technology instructors - one in particular - for his success at Northeast. He describes Travis Kaup as patient and takes time to go over any area a student may not understand on a
one-on-one basis.

“He enjoys teaching and enjoys his job that’s for sure,” Gerdes said.

“Jesse is a model student in the program,” Kaup said. “Promptness is one of his strengths and is key to a lot of what we do. Not only does he show up early, but he is on task, working from beginning of lab to the end of lab. I got to work with him for a full year and Jesse has been easy to teach because he is a very responsive student and isn’t afraid to speak up if there is something he needs to understand more thoroughly.”

Another role model for Gerdes is his father, Tracy. He has picked up many traits from his dad when they got into farming.

“He sticks by my side, and he has also led the path for my work ethic - you don’t give up unless you are done, and you don’t leave stuff unfinished.” Jesse Gerdes said.

Outside the classroom Gerdes identified Northeast’s Residence Life experience as an important component of his collegiate experience. Living on the Norfolk campus allowed everything to be readably available to him in one location rather than being so spread out like other schools he looked at.

He also is involved in TRIO, a federally funded program that assists income-eligible individuals, first-generation college students and those with disabilities to progress through the academic pipeline to post-baccalaureate programs. It also focuses on career exploration, cultural and social enrichment, and self-awareness.

Gerdes uses TRIO’s various services including cultural and social activities such as zip lining at Mahoney State Park and attending the Broadway musical, Hamilton, at the Orpheum Theatre in Omaha.

“These events helped me become more social as the transition out of COVID allowed for more things to do,” he said. “The first year COVID made it tough to get out and do as much, but as things got better, TRIO had a lot of fun things to offer.”

In addition to TRIO, Gerdes has been active in the archery club on campus where he shoots bows every other Monday. Outside of school and work, he is involved with the Milford FFA chapter and Milford Archery group from his high school. He also assists with donating his time and equipment, runs contests for students to compete in and has trained students in poultry production. He has achieved a confidence in all aspects of this work. At Nebraska Equipment Group, he services equipment and troubleshoots electrical and hydraulic problems and hauls equipment in utilizing his CDL.

For his efforts and dedication to his education and service to others, Gerdes was named the Northeast Community College TRIO Student of the Month for February. Each month, a participating TRIO student is selected for the award based upon their work in TRIO and in other activities on campus or in the community. Gerdes and other TRIO Student of the Month award recipients receive a plaque and have their photo placed on the program’s Achievement Recognition board in the TRIO office, which features the theme, True Leaders, which is defined as those who are first to strive and who give their all for the success of the team.

Gerdes commends the TRIO staff, saying “They do a great job; they touch base with the students, and they make things happen. For a student you don’t always know who to talk to and the TRIO staff point the direction and offer us support.”

He credits his TRIO advisor, Matt Sazama, for helping layout a pathway to allow him to obtain both degrees.

“I am very thankful for having the academic support along with someone like Matt who feels like a friend while in college.”

“Jesse is a fixer and enjoys a challenging problem. He said he loves learning, which is why he loves a challenge, because you learn from it,” Sazama said. “This will assist him in his career path in diesel technology and later in life managing his family farm.”

For more information on the TRIO program, visit northeast.edu/Support-Services/TRIO/.