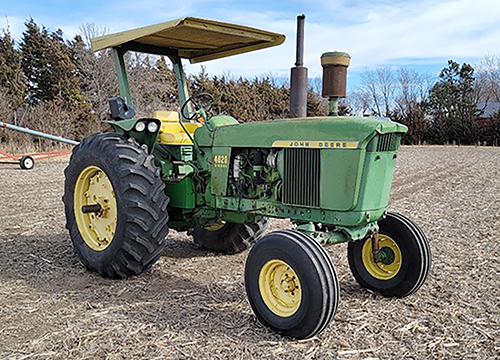 NORFOLK, Neb. - There’s a special twist to a farm retirement auction next week on the Big Iron platform. Proceeds from one of the tractors offered will be donated to the Northeast Community College agriculture department.

The equipment being auctioned belongs to Bob and Shelley Noonan. They retired from active farming last year after 41 years on their place near Cornlea where they have raised their three children as well as corn and soybeans and seed corn for Producers Hybrids.

“I love farming so much,” Bob Noonan said, “but I have come to find that I love teaching about farming just as much.”

Noonan has been a full-time ag instructor at Northeast Community College since 2013, and he says he plans to continue in that position another six or seven years. But the Noonans now have seven grandchildren and he wants more time to spend with his family.

As an ag instructor, Noonan has been part of the planning for new ag facilities on the Norfolk campus. He said he wanted to make a meaningful donation to the Nexus fund drive for these buildings, and his retirement from active farming provided that opportunity.

“Another ag instructor, Bernie Theyen, told me about a farmer in Illinois who put a tractor up for auction for a hospital,” Noonan said, “and it brought hundreds of thousands of dollars.”

He doesn’t expect his 1967 4020 John Deere to bring a six-figure bid when it is sold Wednesday, but he is hoping it will generate a sizeable gift to Northeast, and perhaps encourage other retiring farmers to consider similar donations.

“I hope some others recognize the value of the college ag department and especially of the Nexus project. All Northeast ag students will be in the new buildings sometime during their time at Northeast,” he continued, “especially the vet tech, animal science and precision and mechanized ag students.”

Noonan says agriculture is a good career choice for students right now, with a wide variety of opportunities.

“I hope before I retire, we will be able to draw more students from the cities and towns who really don’t have a big ag background. It’s not just doing the hands on farming every day,” he explained of current opportunities in agriculture. “The co-ops, all the agronomy businesses, have become so much more specialized. Those businesses and the bigger farmers need the expertise from the type of students we produce at the College.”

The 4020 being donated to Northeast was the John Deere workhorse in the 1970s, Noonan explained.

“That tractor has done so much field work, planted so many crops. It hauled irrigation pipe, pulled manure spreaders. Its main purpose in recent years was on augers to load out corn and soybeans.”

Noonan’s father purchased it new in 1970 from the implement dealer in Humphrey and gave it to Bob and Shelley in 1982. Noonan says he isn’t big on equipment appearance, so his tractor could use a coat of paint.

“But it has a recent engine overhaul and a new clutch put in last year,” he said. “Plus it has brand new batteries.”

The Noonan Retirement Auction will be held Wed., March 23, on the Big Iron site. For a listing of the equipment and more information on how to bid, visit the website bigiron.com and search for “Noonan.”

This 1967 John Deere 4020 will be auctioned on the Big Iron site Wed., March 23. Proceeds from this tractor will be donated to the agriculture department at Northeast Community College. (Courtesy Photo)