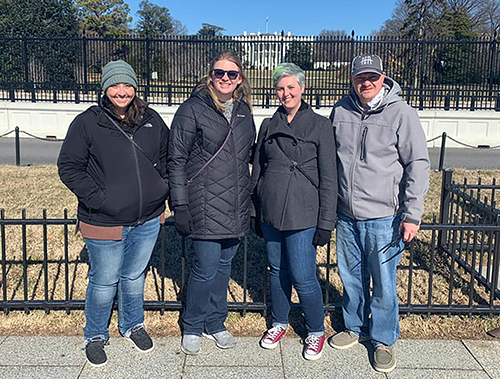 NORFOLK, Neb. – A member of the agriculture faculty at Northeast Community College has returned home after a ten-day national study/travel seminar earlier this month that was conducted by the Nebraska LEAD (Leadership Education/Action Development) program.

Horticulture Instructor Trentee Bush, Norfolk, who was selected as a Nebraska LEAD Fellow last year, was among those who participated in the seminar that made stops in Chicago, Kansas City and Washington D.C. During their travels, Bush and the other Nebraska LEAD Fellows met with business, industry and government leaders. Terry Hejny, director of the Nebraska LEAD Program, served as group leader for the study/travel seminar.

Several highlights included visits to NuFarm, the Chicago High School for Agricultural Sciences, and Climate-Fieldview in Chicago; CenterPoint and Johnson County Community College to meet with representatives of the Region 7 Environmental Protection Agency and with MyAnIML, an artificial intelligence-powered early disease prediction and notification company, and others in Kansas City; and the American Farm Bureau Federation, National Cattlemen’s Beef Association, the Embassy of Canada, and the United States Department of Agriculture in Washington, D.C. Also included in the tour were briefings regarding John Deere operations in Moline, Ill.

A major objective of the study/travel seminar was to provide participants with the opportunity to meet leaders who help shape local, state, and national policy in agriculture and related areas and to create first- hand exposure to varied social and economic conditions/issues that exist in the United States. The mission of the Nebraska LEAD program is “to prepare and motivate men and women in agriculture for more effective leadership” and is designed to speed up the leadership process.

The Nebraska LEAD Program includes men and women, currently active in production agriculture and agribusiness. It is a two-year leadership development program under the direction of the Nebraska Agricultural Leadership Council, in cooperation with the University of Nebraska’s Institute of Agriculture and Natural Resources. Program content that is essential to leadership focuses on economics, government, human relations, communications, international trade, sociology, education, the arts, social-cultural understandings as well as agriculture.

Bush taught horticulture, math, and a variety of other courses at the Nebraska College of Technical Agriculture in Curtis from 2010 to 2019. In 2019, she transitioned to Northeast Community College to teach horticulture and agriculture courses.

For more information about the selection process or to request an application, go online to lead.unl.edu Application deadline is June 15, 2022.

Trentee Bush, horticulture instructor at Northeast Community College, (second from right) is joined by three “Fellows” in the Nebraska LEAD (Leadership Education/Action Development) program outside the White House while in Washington D.C. recently. The nation’s capital was one of three stops that members of the program made recently as part of a ten-day national study/travel seminar. The program also made visits to organizations in Chicago and Kansas City. Also pictured are (from left) Hannah Swink, Kearney, Stephanie Schuler, Lincoln, and Steve Landon, Greenwood. (Nebraska LEAD)