A Touch of Brass to perform at Northeast Community College 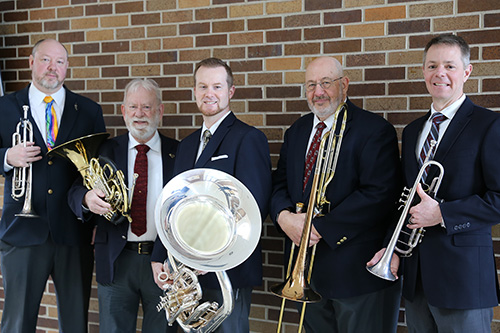 NORFOLK, Neb. – The five-member ensemble “A Touch of Brass” will perform in concert next weekend on the campus of Northeast Community College in Norfolk. The concert will be held Sun., Jan. 30, at 2 p.m., in the Cox Activities Center Theatre, 801 E. Benjamin Ave.

The theme of the group’s concert is “The Many Shades of Brass.” The program will include the selections:
“Canzona Bergamasca," by Samuel Scheidt and arranged by Conrad De Jong, "Toccata and Fugue in D Minor," by Johann Sebastian Bach and arranged by Fred Mills, "Suite from West Side Story," (Something’s Comin’, Tonight, America, and Somewhere) by Leonard Bernstein and arranged by Jack Gale, "Frost Fire (Bright and Fast, Gentle and Mysterious and Tense and Dramatic) by Eric Ewazen, and "If I Only Had a Brain," by Harold Arlen and arranged by Gary Slechta.

Members of A Touch of Brass are Dave Bohnert - Trumpet. He is dean of the School of Arts and Humanities at Wayne State College. Kevin McLouth - Trumpet. McLouth is a music instructor and director of Instrumental Studies at Northeast Community College. Gary Reeves - French Horn. He has been a music instructor in Iowa, Alabama, Utah, Oregon, and South Dakota. Reeves serves as an adjunct professor at Morningside University in Sioux City.

Playing trombone is Randy Neuharth, a longtime member of the quintet. He taught public schools in South Dakota and was in Bloomfield for 30-years. Neuharth served as director of Musical Activities at Northeast Community College for ten years before his retirement. Anchoring A Touch of Brass is Joshua Calkin - Tuba. He is director of Bands at Wayne State College.

The concert is free and open to the public. It will also be livestreamed on the A Touch of Brass Facebook page facebook.com/pages/category/Musician-Band/A-Touch-of-Brass-105486268184755/.