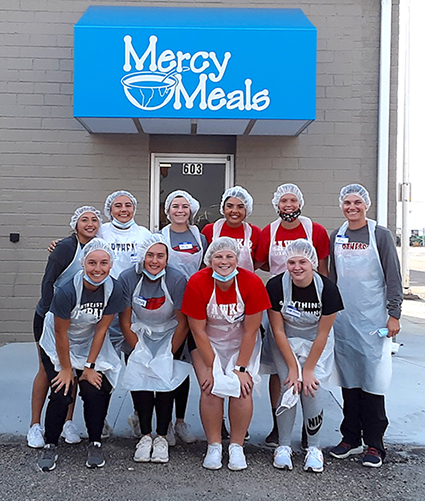 NORFOLK, Neb. - Students-athletes at Northeast Community College pack in quite a bit each semester – whether it’s on the court or field, work in the classroom or just hanging out with friends. However, several of them took personal time away from the college earlier this fall to help others in need.

Members of the Men’s Basketball and Women’s Softball teams spent a weekend volunteering during Mercy Meal’s Pack Away Hunger event. The student-athletes joined over 500 other volunteers in the organization’s new building at 603 Madison Ave., to pack special meals to feed families in the United States and in more than 20 countries.

Rhonda Wrenholt, director of Mercy Meals, is grateful for the teams’ participation at the two-day event.

“It was a blessing, a complete blessing,” Wrenholt said. The (student-athletes) actually wanted to learn more about Mercy Meals, asking multiple questions and then sharing that information with other volunteers on the lines. Sometimes, some of the lines don’t have as many people because they may be ill or they can’t make it. And then so the teams fill in and pack right there with the other people and visit with them and tell them about their lives and tell them about Mercy Meals too.”

Pack Away Hunger included six sessions (two hours each) over a two-day period from 8 a.m.-8 p.m. The volunteers who came from communities across northeast Nebraska including Albion, Columbus, Laurel, Randolph, and Spencer, among others, work several jobs - from creating meals to assembling boxes, to refilling supplies. Each team on the line worked 12-hour shifts. The softball team worked on a Saturday and the men’s basketball team worked on Sunday.

Eight-to-ten people on a line pack the meals which include one cup of soy flakes (made from soybeans grown in the area), a level tablespoon of chicken flavoring with 20 vitamins and minerals, a tablespoon of six dried vegetables, and a cup of white rice.

“And all of that goes into a bag and can feed six people at 12-cents a serving, which comes out to 72-cents a bag,” she said. “The bag can sustain the people who eat the meal for two-to-three-days because they hardly have any food available.”

Mercy Meals collaborates with Orphan Grain Train, which completes the paperwork and distributes the meals. The over 136,000 meals from the event were shipped immediately to those in need.

Pack Away Hunger is not new to Northeast student-athletes. This is the 11th year Coach Dan Anderson has had his basketball players participate and 2021 marked the fourth year for Coach Iris Woodhead’s softball team.

“We’re so thankful they are there for us every single year,” Wrenholt said. “Dan has never wavered, and those students were there the whole 12 hour shifts and we appreciate everything that they have done. Dan has always been committed to this and once we learned Iris wanted to get involve too, we were so grateful. They say, ‘Yes’ every time we ask them to help out.”

Northeast Community College Softball Coach Iris Woodhead and some of her players poses outside of Mercy Meals in Norfolk where they were among 500 volunteers who worked during the organization’s Pack Away Hunger event. Mercy Meals collaborates with Orphan Grain Train, which completes the paperwork and distributes the meals, which totaled over 136,000 from this year’s event. Pictured in the front row (from left) are Makynzie Loftus, Kinsey McClain, Greta Lindberg, and Kaylee Petersen. In the back row are Makayla Serna, Brianna Aguilera, Mia Eickhoff, Jade Koch, Morgan Kleinschmit, and Woodhead.