Kuehn and Willers to step down from Northeast Board of Governors 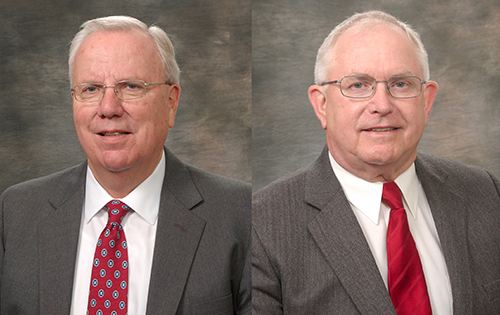 NORFOLK, Neb. – Two longtime members of the Northeast Community College of Board of Governors have announced their resignations. Arlan Kuehn, South Sioux City, and Gene Willers, Pilger, submitted their letters of resignation during the board’s monthly meeting in Norfolk on Thursday.

Kuehn has served on the Northeast Board of Governors representing District III of Dakota and Dixon counties in their entirety and the eastern portion of Cedar County since 2013. He has chaired various committees and served as board vice-chairperson in 2019 and 2020.

Willers has served on the Board of Governors representing District IV of Burt, Cuming, Stanton, and Thurston counties in their entirety and the southern portion of Madison County since 2009. He has chaired several committees and served as board chairperson in 2015. He was board vice-chairperson in 2014.

“I wish to thank the board members, President (Leah) Barrett and her staff and the Northeast Community College family for the great support I have received during my tenure on the board,” Willers said. “I leave with confidence in the future of this great institution.”

Steve Anderson, board chair, spoke on behalf of Kuehn, who was unable to attend Thursday’s meeting. He called Kuehn a “tremendous supporter” of the college.

“He loves Northeast Community College and he very much regrets having to make this decision,” Anderson said.

“Arlan and Gene have been wonderful members of the board. They have understood Nebraska’s community college system and its work as it relates in developing a skilled workforce for the Northeast’s 20 county service area and beyond, “Anderson said. “In their combined 20-years of service, they have been an integral part in the growth and advancement of Northeast Community College. They will certainly be missed.”

Kuehn began his career in auto sales in 1970 when he started working for a new car dealership. In 1999, he began his own dealership, Kuehn Auto Sales in South Sioux City. He has been active in the auto industry, serving on several boards and commissions. He served as president of the 15,000-member National Independent Automobile Dealers Association (NIADA) in 2014. Kuehn was the first, two-term president of the NIADA (1988-89) and served on the association’s board of directors.

Willers is the retired president of Midwest Bank Pilger and chief lending officer for Midwest Bank. He has over 30 years’ experience in the banking industry, including 17 years at First National Bank in Schuyler and nine years on the staff of Midwest Bank. Willers has been active in community service for many years. He served as treasurer of the Elkhorn Valley Economic Development Council, and as chairperson of the Pilger Housing Authority. He also has served as a member of the Midwest Bank Board of Directors and the Wisner-Pilger School Foundation Board of Directors.

According to board bylaws, the Board of Governors will accept applications for the positions of both Kuehn and Willers. This will begin in January. Applicants must live in the district they represent to be considered. In this case the openings are in District III and District IV. A board selection committee will make a recommendation of successors to the full board for approval. The new members will be sworn in at a future meeting.

For further information, contact Diane Reikofski, board recording secretary, at (402) 844-7055. Additional information on the board may be found online at northeast.edu/About-Us/Board-of-Governors/.

The Northeast Community College Board of Governors is made up of 11 members, with two members representing each of the five districts. There is one at-large member who represents the College’s entire 20-county service area.