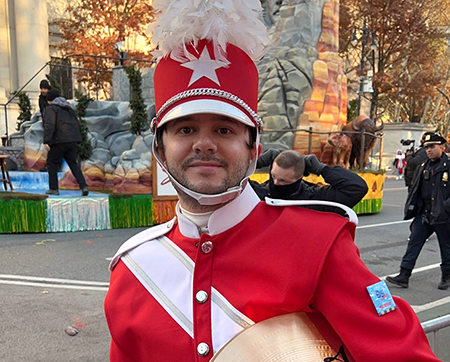 NEW YORK, New York – Zeke Potter got an early start to celebrating Thanksgiving recently. He and few friends got up extra early to don their uniforms, check their instruments and prepare to head to their spot for their appearance in the world-famous Macy’s Thanksgiving Day parade.

Potter, Des Moines, Iowa, was member of the department store’s Great American Marching Band, which appeared toward the beginning of the parade that began on the Upper West Side and concluded at Macy’s flagship store at 34th Street and Herald Square in New York City.

The parade is not a new experience for the Northeast Community College graduate. Potter first marched in the parade with the band as a percussionist when he was a senior in high school in 2008. He was afforded the opportunity to appear in the parade again in 2015, as a member of the alumni band. For this year’s parade, he played cymbals with the alumni band.

“This year was the 15th anniversary of the band and they invited alumni back to play,” Potter said. “There were about 100 of us (in the alumni band), making the entire band about 250 members. It felt great to be back, the weather was nice and in the 50s. It was perfect for parade day.”

The prestigious band took an honor position among the gigantic helium balloons, impressive floats carrying celebrities, and the nation's top marching bands. Stepping-off from Central Park, the band was cheered by the three million spectators who lined the parade route. Arriving at Macy's Herald Square, the band performed for celebrity hosts, a grandstand audience, and more than 50 million TV viewers watching the broadcast live on NBC.

While at Northeast, Potter earned an Associate of Arts degree in 2013 and an Associate of Applied Science degree in Information Technology in 2015. He also graduated from Bellevue University, mostly recently with a master’s degree in Cybersecurity in 2021. In addition, he is involved with Optimist International, which will include serving as the service club’s District Governor for the state of Iowa in 2022-23.

Potter said the band rehearsed for approximately 17 hours prior to the parade, including a 3:30 a.m. rehearsal that morning. He said in addition to the thrill of it all and marching before millions of people, he was impressed with the giant helium-filled balloons that also are part of the festivities.

“It’s great to be part of such a great band; the official band of Macy’s. It was an amazing feeling having ‘Toni, the bandleader bear’ balloon created just for us,” he said. “We’re planning to have alumni back in five years for the 20th anniversary of the band in the 100th parade. It will definitely be a big deal.”

Northeast Community College graduate Zeke Potter, Des Moines, Iowa, poses in front of the State of South Dakota float after he performed with the Macy’s Great American Band as a member of its alumni Thanksgiving Day in New York City. This is the third time Potter has marched in the world-famous parade.