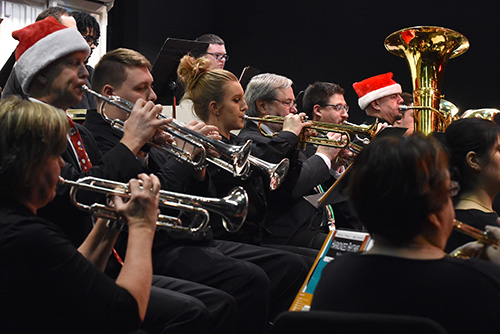 NORFOLK, Neb. – The music department at Northeast Community College invites everyone to get in the holiday spirit with a concert to be held soon.

The Northeast Community College Holiday Concert will be held on Sun., Dec. 12, at 2 p.m. in the Lifelong Learning Center on the Norfolk campus. The college/community concert band and concert choir will take the stage as well as a percussion ensemble.

Vocal selections, directed by Caleb Nihira, will include “Stopping by Woods on a Snowy Evening,” by Eugene Butler; “Bring a Torch, Jeannette, Isabella,” arranged by Robert Shaw and Alice Parker; “In the Bleak Midwinter,” – arranged by Gustav Holst; and “Tomorrow Shall Be My Dancing Day,” arranged by John Leavitt.

Margaret Schultz is the accompanist.

With Kevin McLouth as director, the Northeast College/Community Concert Band will be performing “A Christmas Festival,” by Leroy Anderson, “Into the Storm,” by Robert W. Smith and “On This Day Earth Shall Ring,” by         Holst and arranged by Smith.

The combined band and choir will also perform a “Christmas Sing-Along” arranged by James Ployhar.

Members of the Concert Choir include:

Members of the Community/College Concert Band include:

The concert is free and open to the public. It may also be viewed live at team1sports.com/northeastcc/.