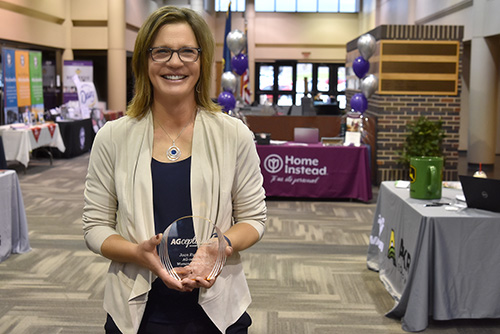 The announcement was made during a video tribute that was played during the opening session of the 13th annual conference. The video was sponsored by Farm Credit Services of America and produced by the Northeast Agriculture Department and District 25 Productions, LLC.

“Joan’s story is very cool,” said Tara Smydra, dean of science, technology, agriculture and math at Northeast Community College and conference director. “She didn’t come from a farm; this isn’t her first home, but it is definitely her home now.”

Smydra said Ruskamp exhibits many attributes that allow her to be called “agceptional.”

“She is a doer: she is a connector; she is a relater, she is a thinker. (Joan) does all of these this so well that it just it just makes you want to be a better person … “She is so active – her spirit of service is really wonderful.”

A special selection committee made up of professionals from agricultural businesses and operations is assembled each year to select the winner from a very competitive group of nominees.

Ruskamp was nominated by Anne Meis, of Elgin, and Lisa Lunz, of Wakefield, both of whom are past AgCeptional Woman of the Year recipients. They said Ruskamp serves as an excellent spokesperson for the agriculture industry.

“Joan has shared her story on the local, state and national level,” according to the nomination. “Following presentations at a previous Food for Tomorrow Conference in New York, NY, for example, she invited the audience to ask questions and learn more about where food comes from. Although the conversation had begun to be combative and challenging, Joan had a way of changing the whole tone of the meeting with her calm, educating manner.”

In accepting the award on Friday, Ruskamp commented on the role women play in agriculture and the recognition of their work.

“That what this conference is all about; it’s celebrating women in agriculture and the many roles we all have,” she said.

“In agriculture every role does matter because it takes so many moving parts to do what we do on our farms and ranches.” … “People are listening, people are watching and as women in agriculture let’s keep sharing our stories.”

Ruskamp and her husband, Steve, began farming in 1981 and now, 40 years later, continue to work side-by-side caring for their family farm. The Ruskamp family feeds cattle in a 4,000 head feedlot and raises corn, soybeans and alfalfa near Dodge. Since her father-in-law was raised on the farm, it has always been important for the family to honor those who started the operation more than 100-years ago. The Ruskamp home has always centered on its strong Catholic faith as the family has dealt with life’s challenges while raising five children and growing the farm and feedlot.

Ruskamp is a graduate of the University of Nebraska at Curtis, where she earned an associate degree in veterinary medicine. She has been very active in the beef industry, with service to organizations including the Dodge County Cattlemen, Nebraska Cattlemen, National Cattlemen's Beef Association, American National Cattle Women; Nebraska Farm Bureau, Nebraska Soybean Association and Nebraska Corn Board.

While serving as chairperson of the National Cattleman’s Beef Board, Ruskamp was called to the leadership position by her peers as a national beef promoter. The leadership role allowed her to travel nationally and internationally to promote beef and make decisions about the use of the beef checkoff. The Ruskamps continue to serve the industry through involvement in the Nebraska Cattlemen Association.

“I think that women involved in agriculture should look to Joan as a role model and an inspiration because she truly shows that she can do a lot of things,” said Ann Marie Bosshamer, executive director of the Nebraska Beef Council Beef Check-off Programs. “You can be a mother, you can be a wife, you can be a cattle feeder, or you can be an advocate. There’s so many hats she’s able to wear; she does it with not only professionalism, but with grace.”

Ashley Kohls, vice president of Government Affairs for the Nebraska Cattlemen, calls Ruskamp a leader for both the beef industry and for women in agriculture.

“Joan has a way of talking about what they do and why they do things on their farm that consumers can understand,” Kohls said. “We can always call on Joan to speak with any media person in a way that we trust will shine a positive light on our industry.”

Ruskamp also gives back to her community as a 4-H leader, an EMT (emergency medical technician) and with her church, among other activities. She served in several leadership positions as well as chair on the Cattleman’s Beef Board. She is a founding member of the Ag-Ceptional Women's Conference planning committee, is an alum of the Nebraska LEAD program and volunteers for Common Ground.

Ruskamp has received the Livestock Industry Appreciation Award from the Nebraska Corn Board, the FarmHer Hall of Fame award, 2020-2021 Grand Island Northwest High School Distinguished Alumni Award, Alumni Achievement Award from the University of Nebraska at Curtis and was a finalist for the Omaha Catholic Business Group Leading with Faith Award.

The Ruskamps have hosted numerous tours on their farm to share the corn-fed beef story with adults from around the world as well as youth through the Farm Bureau Pen Pal Program. They have been married for 40 years and have five children, three sons-in-law, a daughter-in-law and eight grandchildren.

Kurtis Harms, director of communications for the Nebraska Corn Board, calls Ruskamp the perfect ambassador for agriculture.