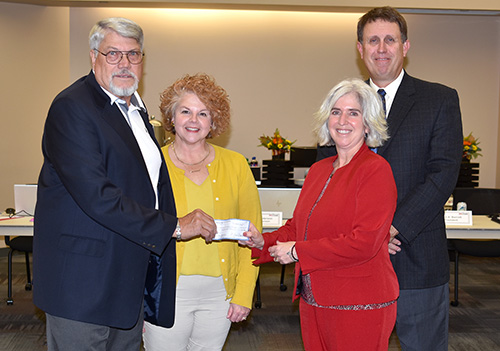 NORFOLK, Neb. – A day on the golf course will pay dividends for students at Northeast Community College. A check for $15,000 has been presented to the College to be used to assist students with scholarships.

Steve Anderson, Northeast board of governor’s chairperson, and Leah Barrett, president of the college, accepted a check from representatives of the Nebraska Public Power District (NPPD) at meeting of the board of governors in Norfolk recently.

The funding, which is used for scholarships awarded to students enrolled in the state’s community college system, was part of $185,000 raised during the 30th annual Wells Fargo Nebraska Open golf tournament, held at the Elks Country Club in Columbus in September. Scholarships are distributed to the Central, Mid-Plains, Northeast, Southeast, and Western Nebraska community college systems. Each year, sponsorship money and entry fees from golfers are divided between the tournament purse and the Nebraska Community College Foundation.

Over the 30 years, more than $1.8 million dollars in scholarship money has been raised as a result of the Nebraska Open and its Pro-Am event. Northeast Community College has received over $345,000 in that time.

“These scholarship dollars will certainly impact many of our students in achieving their academic goals. We would like to extend our gratitude to Wells Fargo and all of the sponsors in providing these funds, and to Nebraska Public Power District for coordinating the tournament. These generous people understand the importance of making these scholarship dollars available to our students.”

“The Nebraska Open has provided a great opportunity for NPPD to support the future of our state’s workforce,” said Tom Kent, president and chief executive officer of NPPD. “I’m always impressed at the amount of money raised each year that goes to help students in the communities we serve.”

More than 35 businesses sponsored this year’s event, including Wells Fargo, who returned as the title sponsor, along with national, regional and Columbus-based companies such as Behlen Mfg. Co., Kelly Supply Co., and Nebraska Energy Federal Credit Union.

Representatives of the Nebraska Public Power District present a check for $15,000 to Northeast Community College officials. The scholarship funds come from proceeds from the 2021 Nebraska Open golf tournament, coordinated by NPPD. Wells Fargo is the title sponsor. Pictured (from left) are Bill Johnson, Pilger, NPPD board member, Brittney Koenig, NPPD account manager in Norfolk, Leah Barret, president of Northeast Community College, and Steve Anderson, chair of the Northeast board of governors.