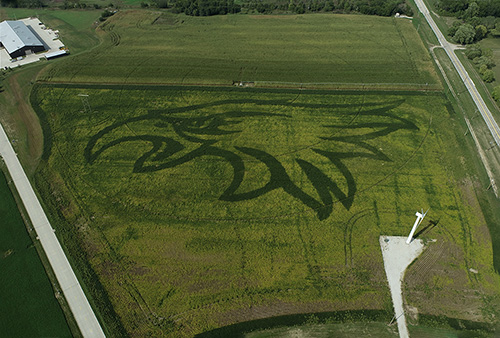 NORFOLK, Neb. – Students in the Precision Agriculture program at Northeast Community College are trained to develop technical skills and learn to interpret, analyze, and utilize data gathered from precision agriculture technologies in order to improve production. But, there’s no reason why they can’t have a little fun along the way.

In preparing Northeast’s annual field plans for the growing season earlier this year, Chance Lambrecht, precision agriculture instructor, and Rob Thomas, college farm manager, discussed utilizing a multi-hybrid planter that was built in a precision hardware course to plant a design on one of the farm’s soybean fields. It was decided that Northeast’s athletic mascot of the Hawk could showcase the planter’s technological capability and promote the spirit of Northeast Community College.

Thomas designed the logo into a planting prescription.

“Using Climate Fieldview, I was able to take the Northeast Hawk and draw it on the GIS (geographic information system) program,” Thomas said. “I then was then able input the specific varieties and plant populations needed for the field to create the logo.”

“The principle behind a multi-genetic planter is to respond to variability within a field. This includes planting offensive genetics in the high-yielding environments, and conversely, planting defensive genetics in the lower-yielding environments within a field,” Lambrecht said. “The variation in this field surely doesn’t take the shape of a Northeast Hawk. However, modern equipment has the capability to respond in such a manner to address yield-limiting factors with such resolution.”

Each spring, students in the precision hardware course build the planter from the toolbar up, which means there are many calibrations that need to take place. Lambrecht said if equipment is uncalibrated, it will not perform at its optimum level.

“The students don’t just get to pull it out of the shed and plant. Every component must be calibrated before this planter is deemed ‘field-ready.’ I also knew the clutching on-and-off of seed meters were down to the inch, as we were digging behind the planter to verify. Not only that, but it was an assignment to ensure clutching was impeccable. You could say they everyone received an A+ in that department.

The planter setup was completed by students and supervised by Lambrecht. In addition, students in the precision hardware class had the opportunity to plant the field with soybean seed that was provided by the Ag program’s partnership with Norfolk Helena, in coordination with Alan Colsden, branch manager for Helena, and Keith Mach, agronomist with AGRIntelligence.

“With the information collected at planting, I was confident the equipment executed the prescription as expected, but the “what if” scenario always sat in the back of my mind throughout the season. With such a large canvas to paint, it is very hard to see from the ground. You actually needed a ‘Hawks-eye view’ to catch this one in its all its glory.”

A drone video of the mural may be viewed on Northeast’s YouTube Channel at youtube.com/watch?v=dTmeHCqyU2k

Northeast Community College’s athletic mascot of a Hawk was on display in a soybean field earlier this fall on the college farm in Norfolk. The mural was created by using a multi-hybrid planter that was built in a precision hardware course to showcase the planter’s technological capability and promote the spirit of Northeast Community College. The College’s Wind Energy Technology program’s turbine may be seen in the lower right corner of the photograph.