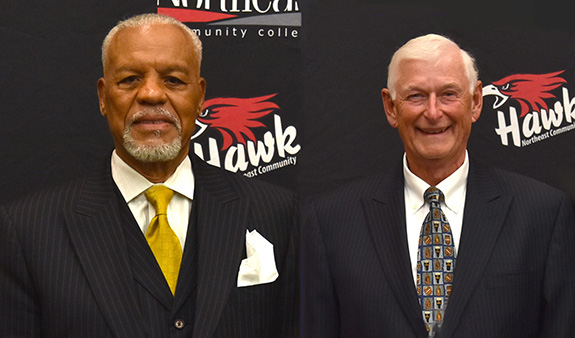 NORFOLK, Neb. – Northeast Community College has honored two individuals for career success and achievement following graduation from the institution. Preston Love, Jr. and Stanley Timm, both of Omaha, have been inducted into Northeast's Alumni Hall of Success.

The recognition is awarded to individuals who have achieved significant professional success, exhibited exemplary citizenship qualities, or have made significant contributions to their communities and/or community affairs. They were inducted during Northeast’s annual Achievement Awards ceremony held recently in the Lifelong Learning Center in Norfolk.

“Whether they have made significant contributions to this institution, the community college system as a whole or they have successfully made outstanding contributions to their local communities, the honorees here tonight exemplify the qualities that we value here at Northeast,” said Leah Barrett president. “Mr. Love and Mr. Timm exemplify the qualities that are prized here at Northeast. We offer them our congratulations.”

Love works tirelessly for the disenfranchised through economic growth, leadership growth, community engagement and get out the vote initiatives. He graduated from Norfolk Junior College, a predecessor institution of Northeast Community College, in 1963 with an Associate of Arts degree and went on to earn a Bachelor of Science in Economics from the University of Nebraska-Lincoln and a master’s in Professional Studies from Bellevue University.

Love played football at the University of Nebraska and was a drafted by the NFL’s Detroit Lions. He was inducted into the Nebraska Black Sports Hall of Fame in 2016.

As a businessman, Love served in the corporate world with IBM for 15 years. He went from business to politics, helping Jesse Jackson run for the Democratic nomination for President in 1984. From politics, Love founded Black Votes Matter Institute of Community Engagement and, most recently, the Institute for Urban Development. In 2020, he was asked to be the Nebraska Democratic Party’s endorsed candidate for U.S. Senate.

In his nomination of Love, Vince Lindenmeyer said he is constantly inspired by his friend’s work ethic.

“Preston works collaboratively to accomplish the larger mission always thinking of the higher civic purpose than his own objectives,” Lindenmeyer said. “He teaches and mentors the next generation to go “make history;” specifically, he teaches youth to appreciate their right to vote and to remember those who came before and ‘bled for the right to vote.’”

Love’s career accomplishments are many. He is an adjunct professor at the University of Nebraska-Omaha where he teaches the African-American Experience. He is also a playwright, author, an award-winning newspaper columnist, a national lecturer, and a contributor to the Fine Lines Journal - a national, quarterly, non-profit publication devoted to networking with creative writers from around the world. In addition, Love serves as first vice president of the NAACP in Omaha and is a board member of Kids Can Center.

In accepting the award, Love called the recognition a blessing.

“We’re connected in our journey. … I graduated from Norfolk Junior College and with that began a journey of my own and the college began a journey that has now become Northeast Community College. So now, after those journeys, we reconnect,” Love said. “And so, the question is ‘What’s next? Where do we go from here?’ … We could slow down … or we should thank the Lord for the blessings, spread our wings and maximize the wisdom that we’ve gained during this journey. And we should lead, we should lead.”

Timm graduated from Norfolk Junior College in May 1968, with an Associate of Arts degree. Immediately after graduation, he worked at a manufacturing plant in Neligh and then moved to Omaha to further his education where earned a Bachelor of Science degree in Business with an Accounting major from Creighton University in 1972.

Timm then began a 50+-year career in the City of Omaha Finance Department including serving as executive director of the Omaha Housing Authority and as the city’s chief financial officer under two mayoral administrations. He worked, in part, with a total of 12 administrations during his career. In those roles he instituted best practices and lead teams in municipal bond financing on major projects such as the CHI Arena and Convention Center.

“In each position, Stan consistently mastered the relevant subject matter and applied his expertise for effective collaboration and positive management results,” Daub said. “His career resume is excellent evidence of his professional ‘Success.’”

Timm has also contributed his time and talents to several organizations such as the North Omaha Development Project, Douglas County Re-entry Task Force, South Omaha Violence Intervention and Prevention Partnership, Building Bright Futures Truancy Prevention Program, YMCA Strong Kids Campaign, and the Muscular Dystrophy Association. He has also been a fundraiser for United Way of the Midlands and has volunteered as a youth basketball and soccer coach.

Timm was grateful for his induction into Northeast’s Alumni Hall of Success.

“This is a teachable moment for me to pass on to the next generation - to my grandchildren. I want them to do their best and try really hard and be successful in life,” Timm said. “This is a humbling experience. And

the reason for that is I know that everyone is this room is a successful person and has a successful story that you either have completed or are in the process of completing. So, it’s very humbling that you are honoring me and the other recipients tonight.”

In addition, last year’s Alumni Hall of Success inductees were recognized during the Achievement Awards ceremony. The event in 2020 was not held due to the pandemic.

Jarod Hendricks, Elkhorn, is a 1993 graduate of Northeast where he earned his degree in building construction. He is president of Lyman-Richie Corp. (Gerhold Concrete Co.), a company he has worked for since his graduation from Northeast. Lyman-Richey Corp., now a CRH operating company, produces more than 1.7 million cubic yards of concrete annually out of its 36 ready mix production facilities across Nebraska, western Iowa, and southeastern South Dakota.

Originally from Pierce, Dr. Jeremy Young is owner-veterinarian of Town and Country Veterinary Clinic in Albion, Elgin, and St. Edward. He graduated from Northeast in 2000 with a degree in pre-professional veterinary/animal science and then pursued a bachelor’s degree in animal science from the University of Nebraska-Lincoln. Young earned his Doctorate of Veterinary Medicine from Kansas State University in 2006. He joined the Town and Country practice after completing his doctorate and assumed ownership in Jan. 2009.

Love, Timm, Hendricks and Young join nearly 250 other Northeast alumni who have been inducted into the Alumni Hall of Success.

Northeast’s Media Arts – Broadcasting program livestreamed the awards ceremony. It may be viewed on demand at team1sports.com/northeastcc/.