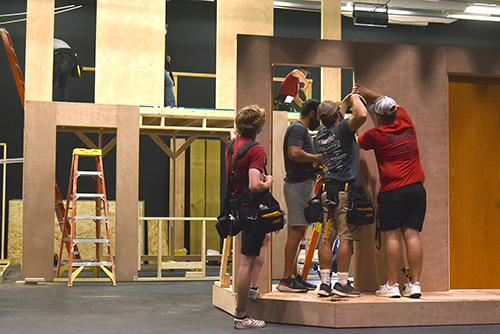 NORFOLK, Neb. – All the world’s a stage, at least it was for several weeks this fall for students in two programs in particular at Northeast Community College.

Instructors in the building construction and theatre programs worked together to design and construct the set for the latest Northeast Community College/Norfolk Community Theatre (NCT) production of Noises Off. The show, which has been called, “the funniest farce ever written,” is a play within a play that features, to put it mildly, an interesting group of actors rehearsing the show, Nothing’s On.

The set is crucial to the plot of the show which features a number of nooks and crannies and several doors on two levels. Actors are in and out of the doors and zip across the stage throughout the production.

Adam Peterson, director of theatre, contacted Ryan Hobza, building construction instructor, to inquire if Hobza and his students could assist in constructing the set for the production.

“I’ve worked with Ryan and his students in the past when we did Little Shop of Horrors a few years ago,” Peterson said. “They did a fantastic job then, so I was eager for the opportunity to work with him again.”

The set for Noises Off was as important in telling the story as any of the roles of the characters. It required a two-level set that rotated 180 degrees between acts, which made it a challenge to both design and build.

Hobza and his students put in a number of hours working on the theatre stage in the Cox Activities Center with work beginning Aug. 26. He said they encountered many challenges during the process.

“The set included two levels, two flights of stairs with railing and several doors which are challenging features for any student,” he said, “and they also got to experience these things during their very first week of school. In addition, the set had to fold down and rotate between acts.”

Noises Off was staged the first two weekends of October. Peterson said the actors and the set performed marvelously.

“The rehearsal process always begins with actors working on a blank stage; typically, we rehearse for many weeks that way,” he said. “However, Ryan and his students were so efficient that when it came to week two of rehearsal, we already had most of the set functional and it was able to be used for rehearsals. Additionally, it was very well designed by David Gaster, who spent over a year planning how it should be constructed.”

Libby McKay, NCT president who also performed in Noises Off, appreciates the partnership between her organization and College. She said construction of the set on the latest show is one example of the many ways that others can get involved in a production.

For most of the academic year, students in the building construction program are focused on constructing a home on the Norfolk campus. The structure is framed-in during their freshmen year and finished in the second year. The houses are then sold at auction. However, students are looking for other projects to construct prior to the home-building process.

Hobza said they were happy to work with Peterson and the theatre program on the Noises Off set. He said they would be happy to do it again.

“The students gained a lot of valuable knowledge through this project because of the unique elements.  We have a large group of students this year and the size of this set allowed everyone to stay involved and contribute to the project,” Hobza said. “Adam and Dave told us during the construction process that the doors would get a lot of heavy use and be slammed many times during the show. When I was able to attend the play, I realized that they weren’t kidding, it was a very action-packed play that I really enjoyed watching.”