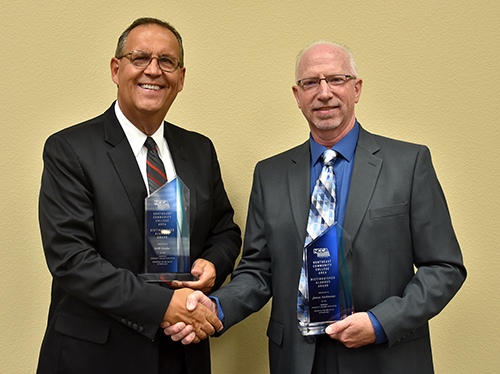 SCOTTSBLUFF, Neb. – Jim McKenzie and Scott Cordes were surprised to run into one another in a restaurant nearly 400 miles from their homes. They learned from one another they were being recognized with similar awards by the Nebraska Community College Association (NCCA) the following day.

Both men are employed by the City of Norfolk. McKenzie, information systems manager, and Cordes, assistant city administrator/public safety director, were selected to receive 2021 Distinguished Alumni awards from Northeast Community College and Southeast Community College, respectively. The awards were presented at the NCCA’s annual conference held earlier this month at Western Nebraska Community College in Scottsbluff.

McKenzie earned an Associate of Applied Technology degree in data processing from Northeast Technical Community College in 1980. Following graduation, he took a position with the Norfolk Livestock Market as controller and information technology manager. It was there he met his lifelong mentor, Randy Emrich, whose family owned the market.

Emrich provided the business knowledge and capital to help McKenzie begin the company, Business Management Software (BMS) at age 24. BMS became an IBM business partner and sold midrange computer systems and developed software for businesses located across the central United States. He eventually sold BMS to focus on family and then took the position of information systems manager for the City of Norfolk where he has served for the past 25 years.

The City of Norfolk’s technology infrastructure would not be where it is today without McKenzie’s expertise. The projects he has worked on range from evolving the city’s computer and phone systems to designing and overseeing the development of Norfolk’s fiber optic network to major projects in several new facilities including the renovated and expanded public library, second fire station and Aquaventure waterpark.

McKenzie described his instructors at Northeast as knowledgeable and caring and that they truly cared about students’ success and their futures.

“Northeast provided the spark and the education to be successful in my career choice. I owe a debt of gratitude to the instructors who not only taught, but who also took an interest in their students as individuals.”

McKenzie is a member of Northeast’s Information Technology Advisory Committee and serves on the board of the Great American Comedy Festival. His hobbies include finance, investing, studying global economics, and land and property investment and renovation.

“The property investment that has brought me the most joy has been the boyhood home of the late Johnny Carson (former Tonight Show host), which took almost five years. I greatly enjoy giving tours to groups as large as busloads to as small as individuals. Seeing the smiles on their faces is the best reward.”

Cordes graduated from the Fire Protection Technology program at Southeast Community College in 1986. He became a firefighter because his grandfather, uncles, cousins, and brothers all served as volunteer firefighters in his hometown of Scribner.

Cordes began his career at the Nebraska State Fire Marshal’s office in Scribner as a fire investigator and inspector. He became fire marshal for the City of Norfolk in 1996, and then was promoted to assistant chief in charge of the Prevention Bureau. He was promoted to fire chief in 2011 and moved into his current roles this past summer.

“My decision to further my education after SCC was to strengthen my role as the administrator of my department and prepare for future endeavors,” he said.