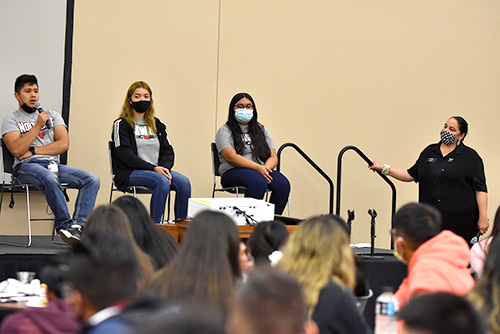 NORFOLK, Neb. – Latino high school sophomores, juniors and seniors from across the region joined with one another recently in Norfolk to be motivated about lessons in life and to learn more about higher education opportunities.

Northeast Community College hosted its annual Latino Youth Summit that featured several Latino leaders and college students who shared stories on how they broke through barriers and achieved success and also answered questions from the high school students.

“The day had great speakers, both first-generation students, who spoke about how breaking barriers were possible and how they achieved this,” Gonzalez said. “We want all Latino students and students in underrepresented areas to understand how college works and that achieving that dream is possible for them. Having a panel of Latino students and professionals made the students realize that if those people can make it, then there is hope for them as well.”

Gonzalez said the day included a mix of information in English and Spanish as several ELL (English language learners) students attended the event.

Summit speakers included Miguelangel Chavez, a South Omaha native who embraces his hometown as the field to plant and harvest his ventures and dreams. A first-generation college graduate and a recipient of the Susan Thompson Buffet Scholarship from the University of Nebraska-Omaha (UNO) with a degree in Public Relations and Advertising, he founded the T-shirt company, MioTees, and a deejay business, DeafAudio DJs, with his brother, JuanCarlos Chavez.

In addition, Blanca Ramirez-Salazar, who recently completed service as a Partnership Specialist and Partnership Coordinator for the U.S. Census Bureau 12-state Denver Region, spoke to the students. She earned a Bachelor of Science degree in social work from UNO and a masters in Community & Regional Planning from the University of Nebraska-Lincoln. Her passion is working on research and community efforts where she can use her bilingual (Spanish-English) skills.

Furthermore, the students were served lunch from the El Barrigas Mexican Grill truck of Norfolk and had the opportunity tour Northeast’s Norfolk campus.