Over 65 high school musicians and vocalists to participate in HAWKFEST 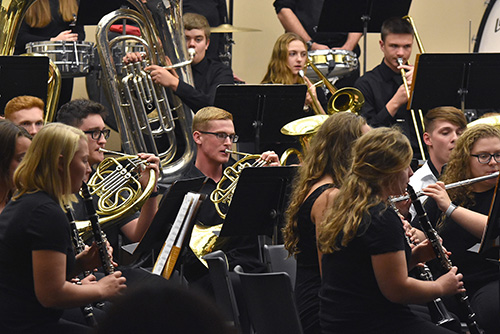 NORFOLK, Neb. – A large number of area high school musicians and vocalists will showcase their talents this Monday at Northeast Community College.

The institution’s music department will host its third annual HAWKFEST on Mon., Oct. 11. The event will feature 65 students, approximately 30 in band and 35 in choir, from 15 area high schools. The honor band will be under the direction of Kevin McLouth, director of instrumental activities at Northeast, while the honor choir will be led by Margaret Schultz, Northeast music instructor.

“Each student was selected through an audition process that included scales and a song to perform,” he said. “Our HAWKFEST is a little different than most honor festivals because we have a band and choir at the same time, and we end our program with both groups performing together.”

HAWKFEST rehearsals begin at 8:30 a.m., with the day concluding with a concert. The performance will be held at 5:30 p.m., in the Lifelong Learning Center on Northeast’s Norfolk campus. It is free and open to the public.

The band will perform Fanfare for the Common Man, Novena, The Red Balloon, and Scaling the North Wall. The choir will sing The Journey, Shule Aroon (a traditional Irish folk song), Didn’t My Lord Deliver Daniel, (a traditional spiritual), and Be the Change. The performance will conclude with band and the choir performing God Bless America.

For more on Northeast Community College’s HAWKFEST, contact McLouth at kevinm@northeast.edu or call (402) 844-7335.

Area high school musicians perform during a HAWKEST honor band performance at Northeast Community College in 2019. The College will host the 2021 version of the third annual event, featuring 65 honor band and honor choir members from 15 area high schools, on Mon., Oct. 11, on the Northeast campus in Norfolk. A performance of both groups will be held at 5:30 p.m. It is free and open to the public.