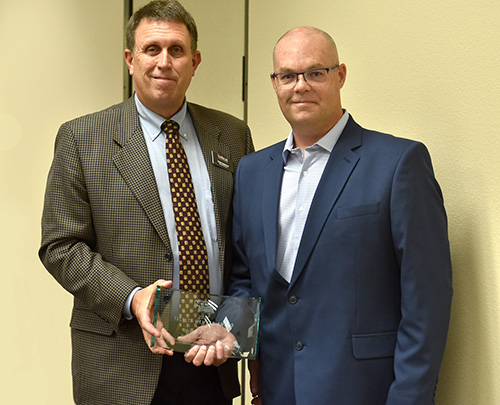 Brian Anderson, media arts – broadcasting instructor, was presented the 2021 Nebraska Community College Association’s Faculty Member Award during the NCCA’s Annual Conference, held at Western Nebraska Community College in Scottsbluff recently. The award is presented annually to a full-time Nebraska community college instructor who has made significant contributions in the classroom.

“Brian Anderson is an exceptional instructor who has an intense focus on a subject that impacts everyone who uses a radio, television or any digital device to listen or view news or sports entertainment programming in their daily lives,” said Michele Gill, vice president of educational services at Northeast. “His knowledge and expertise in broadcasting has not only trained a number of graduates to go on to find employment in a number of successful careers, he has brought state and national recognition to the institution through gold medal competitive performances of his graduates.”

After 25-years as a professional broadcaster/journalist, Anderson brought his expertise to Northeast. In the relatively short time he has been in higher education, Anderson has established a Media Arts – Broadcasting program that has played a pivotal role as a communications vehicle for the College – from providing live broadcasts of events such as commencement and athletic contests to relationships with area commercial broadcasters in providing them video and audio content, as well as serving as a pipeline of graduates to help fill their workforce demands.

Anderson is actively involved in the state and national SkillsUSA organizations. Several of his students have gone on to earn state and national championships at SkillsUSA competitions. As an instructor, he also has a close relationship with the Nebraska Broadcasters Association – the preeminent organization of the state’s broadcasters. This affiliation has allowed Anderson’s students to network with professionals and industry representatives, balancing his classroom instruction. He is also a certified drone pilot, which allows him to teach courses to students and the public in Federal Aviation Administration rules and regulations related to the rising industry.

Steve Anderson, chair of the NCCA Board of Directors and chair of the Northeast Community College Board of Governors, presented the award to Anderson.

“Brian Anderson is a consummate professional in all of his work with his students and his colleagues across the entire College. He is well respected,” Steve Anderson said. “Brian is well suited to operate a successful program training the next generation of broadcasters because he has lived it.”

In accepting the award, Anderson said his key to educating his students is to make everything relevant. He believes his students are successful because he has their work extend beyond the classroom.

“It’s one thing to talk about it, it’s one thing to show somebody how to do it, but you have to get in there and work with them” he said. “… I believe in getting in the trench and leading by example and making everything relevant (to them).”