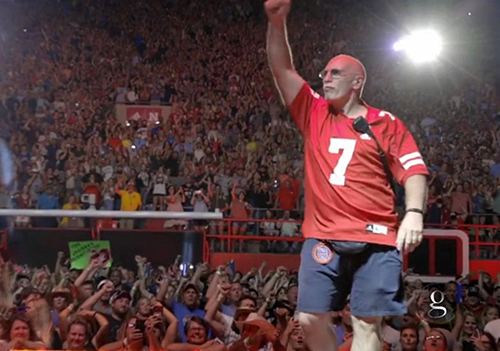 NORFOLK, Neb – The 90,000 fans who packed Memorial Stadium in Lincoln recently weren’t there just to see Garth Brooks, they wanted to hear the country music legend too. Thanks to an eight-person sound crew, led by a Northeast Community College graduate, the fans were not disappointed.

Pat O’Neill and his team worked for days to make sure Brooks could be heard by the entire audience – from those who were just feet from the stage at the 20-yard line to fans sitting in the last row at the top of South Stadium.

“The show itself was pure adrenaline. When you have that many people, and they all start screaming - it's nothing but a thrill for all of us,” O’Neill said. “That place was lit up that night. And I've heard a lot of people say it was even louder than most football games. They were on fire.”

O’Neill is a systems engineer with Clair Global, which provides state-of-the-art audio and technicians for artists and events around the world. He began his career in the industry in a similar capacity with Audio Visions of Omaha immediately after graduating from Northeast with an Associate of Arts degree in Audio Recording Technology in 1990. After 11-years with Audio Visions, he moved to Clair Global, where he has been employed since 2001.

The Grand Island native who now lives in Nashville has been working with Brooks for the last several years and was excited when he learned one of the shows on the artist’s 2021 stadium tour would stop in Lincoln. O’Neill was actually scheduled to work a show at the stadium in April 1996, but tragedy struck that day.

“(Former Nebraska Cornhusker) Brook Berringer died in a plane crash that night and they cancelled the show. So, getting to come back and actually do a show at Memorial Stadium was really exciting for me.”

Memorial Stadium is built for football and has rarely held concerts – the last was the third Farm Aid Concert in 1987. O’Neill said while the sound from Brooks’ concert was flawless, he and his crew worked three full-days to overcome obstacles to make sure the audience enjoyed the show.

“There’s a lot of glass up on the one side that created a lot of reflection. And both sides are concave, so anything that goes into those concave areas reflects directly back to the opposite side somewhere,” he said. “It became a real challenge for us to put just enough energy in there to make it exciting, but not get the big massive reflection. And we did a really, really good job of that; it sounded great everywhere.”

O’Neill has worked several stadium shows over his career including WrestleMania, with many well-known country acts and other large events. One of the biggest was a benefit concert in Toronto in 2003 that featured the Rolling Stones, AC/DC and Rush, among others, who performed before 500,000 fans.

Brooks has been playing stadiums since 2018. Since restarting the tour back in July of this year, he had entertained over 300,000 fans in the first five cities. However, that came to an end following the Lincoln show.

“Now, with a new wave of the Covid-19 virus spreading across the nation, the tour has arrived at the very difficult decision of cancelling and refunding approximately 350,000 tickets in the tour’s next 5 cities,” a statement reads on Brooks’ website.

It was fun while it lasted. O’Neill said his time on the tour had been phenomenal and working with Brooks is like working with his brother.

“Garth is extremely down to earth. He really cares about everybody on the crew – and he cares about his audiences. It’s amazing to watch him interact with people. He’s the kind of guy that makes you want to be a better person.”

O’Neill credits Northeast Community College for giving him the foundation and knowledge to get him to where he is today. It’s where he learned the ins and outs of the business from former instructor Timothy Miller, now a close friend.

“And the biggest thing that Tim taught me when I was at Northeast was to make sure to keep learning,” he said. “The biggest part of the audio business is that you have to continue to learn the entire time you're working. It just doesn't stop; the technology never quits advancing. So, you have to stay on top of it all the time; the different consoles, different software, different manufacturers, everybody has their own way of doing things.”

“Northeast’s program allows you the perfect amount of time to learn what you need,” O’Neill said. “Unlike other programs, the two-year program lets you absorb the knowledge that you're going to need as a baseline to get into this business. I tell those who want to get into the industry, ‘How much work are you willing to put into it? How bad do you want to be a sound guy?’ You have to want it pretty bad. It's all about the work. And it's a lot of hard work.”

O’Neill said despite rigorous schedules developing and operating an event’s sound system, he is able to find time to take in certain parts of shows to make sure he and the crew are creating memorable experiences for the audience. However, he did have to put on the pause button at the Brooks concert when he became the focus of attention. The star himself personally introduced O’Neill and brought him on stage to thank he and his crew in front of the huge crowd.

“So, yesterday, we’re doing sound check and I see way up there along the top railing, I see Pat walking along up there,” Brooks said. “… He was making sure every seat in this building has the best sound that it can possibly have. This is the kind of guys that we’ve got.”

Shortly after that, O’Neill climbed on stage to the adulation of the cheering fans wearing a Scott Frost #7 Nebraska Cornhusker jersey, tossing out some ball caps, stopping short of taking a stage dive - all in good fun, and getting a high-five from Brooks.

Even for the 30-year veteran of the business, it was a special moment for O’Neill.

“That is something that if everyone has the chance to do, they should do it,” he said. “I was wearing a little step monitor that also does my heart rate – and it was flashing, ‘heart rate too high, heart rate too high,’” he said with a laugh. When I downloaded it, it had spiked to 149 while I was up on the stage. Man, it was an incredible feeling.”

Pat O’Neill, systems engineer for Clare Global, takes the stage during Garth Brooks’ concert at Memorial Stadium in Lincoln recently. O’Neill, is a Grand Island native and a 1990 graduate of Northeast Community College. He was called on stage after Brooks personally thanked he and his crew. (Courtesy Photo)