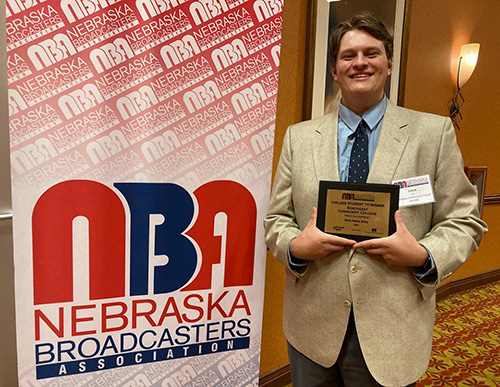 Lance Vie, of Fontanelle, was recognized with a “Gold” award in the collegiate division of the 2021 Nebraska Broadcasters Association (NBA) Pinnacle Awards contest during the association’s annual convention in LaVista August 10-11.

Vie, who graduated from Northeast in May, was recognized with the first-place award in the TV news story category for his feature titled “NEXUS Groundbreaking.” The story featured video and comments from those who attended the NEXUS groundbreaking event at the Chuck M. Pohlman Agriculture Complex in September 2020. The story was produced as an assignment for Vie’s Applied Television class at Northeast and was aired on Hawk TV as part of the station’s regular student-run newscast.

Northeast competed against other two-and-four-year NBA member colleges and universities from across the state in the contest.

Brian Anderson, media arts instructor, said it is quite an honor for his students and the Northeast Broadcasting program to be recognized by Nebraska’s broadcasting industry professionals.

“I am very proud of Lance, and all of our students who submitted entries. Awards like this are a true testament to the high-level of work they provide every day at Northeast. Lance has been driven to succeed from the moment he stepped onto our campus, and he has been a true leader both in and out of the classroom and labs. To jump into a contest pool with student entries from other four-year institutions, and win, is a big feather in the student’s cap.”

Anderson said earning recognition like this is not only a “huge honor,” but it also serves as a feature highlight on a student’s resume.

“Events like this are also a great opportunity for students and graduates to network with commercial radio and TV stations across the state,” he said.

The Northeast Broadcasting program has been an NBA member since 2013.

Vie also earned national honors in June, during the annual National Leadership and Skills Conference, sponsored by SkillsUSA. He was among a team of four Northeast students who won a national championship in the Broadcast News Production category. The team was tasked with writing and producing a three-minute newscast under time constraints. He served as the director of the winning newscast. This year’s conference was held virtually, which presented many challenges. It is the second SkillsUSA national championship by Northeast in the Broadcast News Production contest.

Vie is presently employed by News Channel Nebraska. He plans to transfer to the University of Nebraska-Lincoln this fall to major in Broadcast Production.