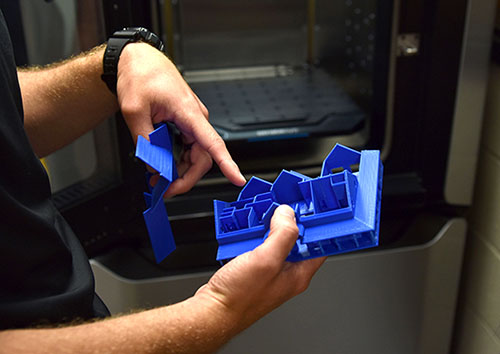 NORFOLK, Neb. – The drafting program at Northeast Community College has some new equipment that has been aiding students in their education. They are creating models and prototypes of their projects either in the classroom on the College’s Norfolk campus or right at home and then watch them come to life on two new 3D (three dimensional) printers.

The devices will enhance and take the program to the next level, according to one instructor. The new printers that replaced some old machines are not only faster and more precise, they have the ability to print several types of products, such as a rubber material - thermoplastic polyurethane (TPU) - and a polycarbonate known as PC-ABS.

TPU is made from renewable resources such as corn starch and sugar cane. PC-ABS is an impact resistant engineering thermoplastic and amorphous polymer that is solid at room temperature, but becomes soft and pliable at high temperatures.

Eric Ternus, drafting instructor of first-year students, said the printers allow students the opportunity to work with different materials in order to understand their functions and benefits as they choose material for a project, as well challenge their ability and skills.

“It’s one thing to detail a structure in the drafting software introduced in the program, but having the assembly printed will demonstrate that the assembly/structure functions the way it should,” Ternus said.

Michael Holcomb, drafting instructor of second year students, said the printers have additional functions over the previous models in the classroom.

“These machines really have awesome capabilities and capacities that our other machines could not do,” Holcomb said. “You had to be here when you were running out of material and change the cartridge, while the new machines just keep going as long as you have enough material loaded.”

Holcomb said having printers that allow the use of more than one material lets students create 3D models that distinguish their various features. Since PC-ABS is water-soluble, it allows portions of the model printed with material that is not needed in the finished product to melt away once it reaches a specific temperature.

“There is a solution mixed in there that just circulates the water at approximately 150 degrees Fahrenheit. The combination of the circulation, the heat and the chemical that we put in there, which is a little bit more aggressive than dishwasher soap, has some corrosive properties that dissolves the support away.”

Students do not have to be in the classroom when they design their models. Last year as students attended their classes off campus during the pandemic, they were able to work at home on a project and simply submit it to be printed.

“You can have an app on your phone or go online, look at the print schedule and then all you have to do is the load the file and click print,” Ternus said. “It's one thing to draw it in a program, but then actually printing to see if it really works is the biggest thing for the 3D printers. It also allows them to get involved in hands-on activities.”

Graduates of the program are prepared for entry-level employment with architectural and engineering firms, general contractors, material suppliers, structural fabricators, or modular and component manufacturers.

Ternus said 3D printers are among the equipment students will encounter once they enter the workforce. They are not only used in designing buildings; 3D printers have other uses. In the medical field, heart and teeth models are printed, for example, to assist doctors as they prepare to treat their patients. Other uses may be found in the production of tools, manufacturing, art and jewelry.

Ternus said they are working to incorporate the printers in all of their drafting classes. He said students who have used them love them.

“Having the capability of designing models at home and sending it in and then watching it has been incredible. I had one student who thought the model was incorrect during an eight-hour print when he was looking at it, but once is was done and he could see more of the detail, it was fine,” he said. “But you could really see how engaged he became in the project as a result.”

Wade Herley, dean of business and humanities at Northeast, said the new printers are providing drafting students additional opportunities to expand their knowledge as they prepare for employment opportunities following graduation.

“These new 3D printers are something the drafting department is very proud of and shows that even during challenging times, Northeast Community College always puts students first,” Herley said. “We are excited for the future of the drafting program and for the students to grow and push the limits in this extraordinary hands-on experience.”

Northeast Community College drafting instructor Eric Ternus holds a model of a small house that was created in one of the program’s new 3D (three dimensional) printers.