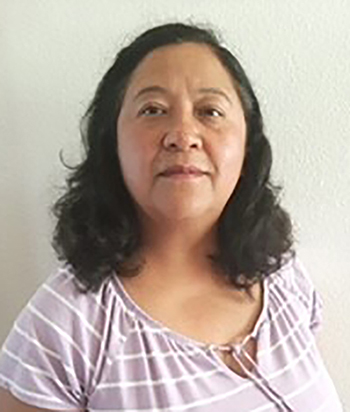 Hernandez was born in El Salvador and came to the United States in 1989. Soon after she arrived, she began a family which now includes her husband and four children, ages 26-to-11. In addition, she has been employed at Tyson Foods in Dakota City for over 20 years.

“Even though she is busy working and taking care of her family, Theresa has always wanted to go back to school to get her GED®,” said Instructor Melissa Kebaili. “Her children encourage her to study and sometimes they join her during a Zoom class to say ‘Hi’ to their mom's teacher and classmates.”

“Theresa says the lessons have taught her so much and they are so fun.”

Hernandez has tried other programs, wasn’t interested in them and they could not keep her motivated.

“I like the colorful video lessons and the upbeat music,” Hernandez said. “I have done some of the lessons many times because I will do them over and over again until I get the score I want.”

Hernandez joined the challenge after Kebaili told her about the contest.

“She thought she should sign up for the challenge because she was doing the lessons anyway and this was just another incentive to encourage her to push herself, Kebaili said. “She says she did not expect to win, but she was so excited that all of her hard work paid off.”

In addition to receiving the Learning Upgrade Top Student Certificate, ProLiteracy awarded Hernandez a $200 VISA gift card. She has used some of the money to go shopping and is saving the remainder to purchase orthopedic shoes she needs for work.

“I use the Learning Upgrade every day as well as go to class,” Hernandez said. “I am so happy to have been given the opportunity to win the certificate and gift card!”