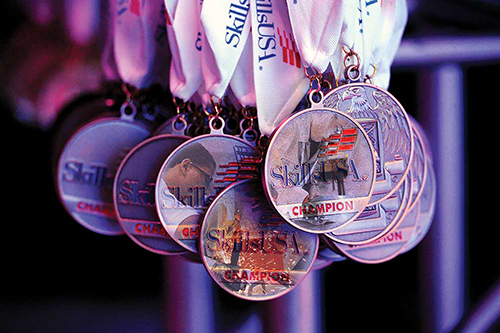 LEESBURG, Va. – Students in two programs at Northeast Community College have earned national championships in competitions that showcase the workforce knowledge they have gained through their education.

Teams in Media Arts – Broadcasting and Information Technology – Robotics captured gold medals in their respective classes during the 2021 SkillsUSA National Career Contest recently. In the competitions, students in skilled and technical education science work against the clock and each other, proving their expertise in a myriad of occupations.

The philosophy of the SkillsUSA championships is to reward students for excellence, to involve industry in directly evaluating student performance and to keep training relevant to employers' needs.

The contest included a written knowledge exam assessing news terminology, direction, technical direction, floor direction, news ethics, newsroom personnel, scripting, and on-air etiquette. For the skills portion, the team was given approximately 25 news wire stories and was required to select, order, and write enough stories to fill a three-minute newscast. Points were deducted for going over or under the three-minute requirement, however Northeast hit the goal at exactly three-minutes.

“The contest coordinator commended our students for working well together as a team and for being self-sufficient, asking few questions” said Brian Anderson, media arts – broadcasting instructor. “I truly believe this is because of our small class size and the fact that we do this type of activity in our program each and every week."

Anderson is proud of his students.

“These students spent a good number of hours practicing for this contest. They were eager to compete and driven to win.”

This year’s contest was a heavy technical lift because it was all virtual, but Anderson said his students stepped up to the challenge.

“Each of our three cameras and the director had to be on a separate device, logged into a Zoom room. It was the director’s job to switch the cameras virtually to simulate a professional news look and sound. It was a production situation we had never encountered in a lab before. It was a challenge, but that’s what a national competition is all about. They practiced for hours, perfected it, and it paid off.”

For Richard Chrisman, information technology instructor, the gold medal his students Garrett Henery, Norfolk, and Emmanuel Soto, Norfolk, captured in the collegiate Robotics: Urban Search and Rescue Competition comes as he prepares to retire this summer after 24-years with the College. It also marks back-to-back national wins as Northeast’s Urban Search and Rescue Team took gold in 2019. (The competition was cancelled last year).

“Both Garrett and Emmanuel were excited when I called them with the news,” Chrisman said. “Garrett said, ‘Cool.’ I estimate they put in around 30 to 40 hours in preparation for the contests.”

The competition focused on explosive ordnance disposal which meant students created a mobile robot similar to those used by emergency service personnel including fire, law enforcement and military. Two-member teams build their robot and arm mechanism prior to the competition and then, during the competition, remotely operate the robot, which should be capable of locating, grabbing, and moving simulated ordnances on the challenge course during the time limited mission.

“The team finished in a time of 3:16 with an allotted time of six minutes,” Chrisman said. “Emmanuel and Garrett each went above what was asked in robot design, creating and editing the Engineering notebook, and preparation for the team interview. I am very proud of their efforts. The contest is about and for the students, but I must say it is nice to retire on a high note as their advisor.

“The level of competition on that contest is high and for him to place third after taking only one programming course is fantastic! His finish is the best by a Northeast student in that competition.”

Wade Herley, dean of business and humanities at Northeast, said he is proud of the achievements of the students and their advisors.

“There are always unforeseen variables within the SkillsUSA competition, especially at the national level, but this year was different with the addition of the challenges of remote competitions. The Northeast students who were successful at the national level this year persevered through many unknowns, and their continued success reflects our outstanding faculty and their programs.”

The Northeast students earned the right to compete at the national level after winning state competitions in April. While the national event was cancelled in 2020, this year’s competition was held virtually, meaning students competed at their own schools. In a typical year. When it is held in-person, the event occupies a space equivalent to 31 football fields or 41 acres. In 2019, there were more than 6,500 contestants in 106 separate events. Nearly 2,000 judges and contest organizers from labor and management participated in the contests.