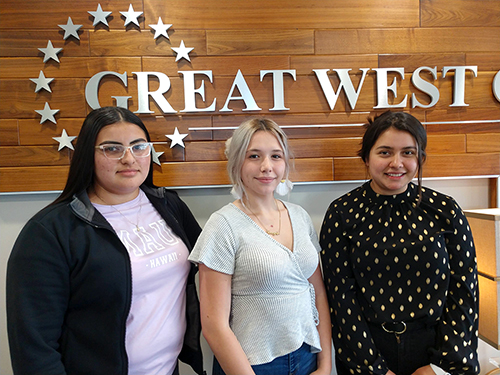 Through the program, Barraza, Hernandez and Vazquez were selected among qualified applicants for the paid internships at Great West Casualty following the submittal of a 500-word essay and interviews. In addition to learning about the insurance industry through hands-on training, each woman will receive 100% tuition reimbursement while earning their associate’s degree from Northeast’s South Sioux City extended campus.

“I was pleased to see how their core values are similar to mine,” Vazquez said. “The fact Great West is looking for younger people to work for them influenced me to want to work with them.”

Hernandez said she is impressed with Great West Casualty’s community involvement in assisting people of her generation.

Hernandez became familiar with the company in another way. Her father, who is a truck driver, obtained insurance through Great West Casualty. After assisting him through the process, she came away with a good appreciation of the company.

“His friends recommended Great West to him. Since he doesn’t speak English, he asked me to look into it and that’s when we found out how good they work with people,” she said. “I translated for him during the process and the people were so sweet, so helpful with the paperwork and everything.”

Barraza said, “I thought that it was a perfect opportunity where I could gain experience about accounting and the business field. Also, the internship covers all your college expenses so I won’t have to worry about any debt. It will also pay you personally for working for the company.”

“This is a great opportunity for each of them,” McClaren said. “In addition to the paid work experience, they will get their tuition, books and fees paid by Great West Casualty. And, once they graduate from Northeast and transfer to a four-year college or university, the company will pay for half of their tuition.”

All three women are looking forward to having the experience with Great West Casualty.

Barraza said the opportunity will not only pay off now, but in the years to come.

“Great West Casualty is a great company that will provide me with crucial knowledge which will open many doors in the future.”

“This is a big step into the world with a lot of responsibilities,” Vazquez said. “The fact that Great West selected me for this is amazing and a once in a lifetime opportunity. It gives me less stress about going to college and paying it off. It also lets me focus more on getting my education while also giving me a chance to work in a business situation environment.”

“I’m excited to be able to work in an environment that I have never been in before. It’s a full-time job working with adults,” Hernandez said with a chuckle. “And the responsibilities that come along with that, too. I feel like it’s going to help me mature a lot.”