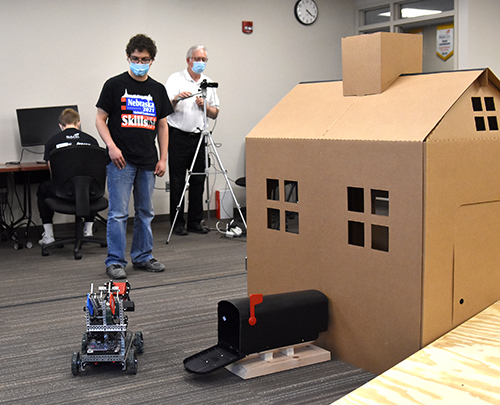 NORFOLK, Neb. – The Northeast Community College robotics team is returning to the national playing field after a one-year hiatus due to the COVID-19 pandemic.

The two-member team of Garrett Henery, Norfolk, and Emmanuel Soto, Norfolk, qualified for the SkillsUSA National Leadership and Skill Championships to be held later this month after they won gold at the Nebraska state collegiate competition this spring in Robotics: Urban Search and Rescue. State championship competitions were held both virtually via Zoom and in person on the Northeast Community College campus in Norfolk.

Norfolk High School’s Team E (John Mann and Tyna Schmidt) qualified for the national event in the same category by also collecting the gold medal at the state competition event at Northeast.

This year’s competition focused on explosive ordnance disposal which meant students created a mobile robot similar to those used by emergency service personnel including fire, law enforcement and military, according to Richard Chrisman, Northeast information technology instructor and robotics team coach. The robot is designed to secure an area by locating, neutralizing, moving, and disposing of explosive materials.

According to SkillsUSA contest guidelines, the demand for designers, skilled technicians, and manufacturing employees who are fluent in mechanical design and electrical systems and highly skilled in troubleshooting and maintenance of robotic systems is projected to continue to grow.

“The current generation of students is expected to take artificial intelligence and robotics into the evolving world of emergency services, finding new ways to help trained personnel react more quickly and effectively,” the guideline state.” “Therefore, it is imperative that our future labor force be on the leading edge of current and emerging technologies and possess the technical and team skills necessary to maintain industry leadership in design, manufacture, maintenance, and operation of life‐saving robotic equipment.”

Robotics is not the only category in which Northeast Community College is sporting a team at the national SkillsUSA event. Northeast took the top three positions in the state collegiate Internetworking competition. John Crockett, Creighton, was named 2021 Nebraska State SkillsUSA Champion, while Jon Koehler, Norfolk, placed second, and Edgar Chavez, Madison, was third.

The national SkillsUSA competition is typically held in Louisville, Ken featuring over 6,000 students competing in over 100 different trade, technical and leadership fields. While this year’s event will still be staged, it is being held virtually, with localized hands-on elements for select competitions.

Northeast Community College student Emmanuel Soto, Norfolk, (center) verbally communicates with his teammate Garrett Henery, Norfolk, (with back to camera) as Henery guides their robot remotely during a SkillsUSA Robotics: Urban Search and Rescue state qualifying competition at Northeast this spring while their instructor/coach Richard Chrisman videos the event. In winning the state gold medal in the collegiate competition, Henery and Soto have qualified for the SkillsUSA National Leadership and Skill Championships to be held later this month. The national competition is typically held in Louisville, Ken., however, this year’s event will be held virtually, with localized hands-on elements for select competitions.