Comfort dogs live up to their name in visit to Northeast 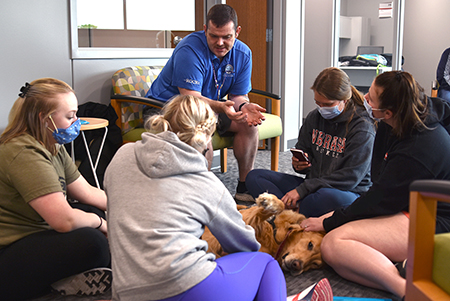 NORFOLK, Neb. – College students have plenty on their minds in the month of May – finals, commencement, applying for jobs, and a pandemic, among other things. But four special visitors to Northeast Community College recently allowed students to let their cares slip away for a short period of time.

The four - golden retrievers named Eden, Joanna, Moses, and Nicodemus - are trained comfort dogs and exhibit a gift of love and gentleness with whomever they encounter. They spent time with the students in the College’s Union 73 on the Norfolk campus.

Corey Gray, of Seward, is the handler for Nicodemus through The Rock Lutheran Church in Seward. He said “Nico” interacts with people at churches, schools, nursing homes, hospitals, events, and in disaster response situations.

“Nico is a friend who brings a calming influence and allows people to open up their hearts and receive help for whatever is affecting them,” Gray said.

The dogs and their handlers were invited to Northeast by Kenzie Pasold, campus advocate for Bright Horizons. She said this was one way that Bright Horizons recognized May as Mental Health Awareness Month.

“As campus advocate I wanted to integrate awareness on campus. What better way than to bring dogs on campus during finals week,” she said. “We also invited students to take time for a self-care assessment and relaxation through coloring. Overall, the turnout was great and I would love to do it again next year!”

LCC K-9 Comfort Dogs were deployed with their handlers to El Paso, following the mass shooting at a Walmart in the west Texas city, New York and New Jersey visiting victims of Superstorm Sandy, and in Connecticut after the tragedy at Sandy Hook Elementary School. Lutheran Church Charities currently has over 130 LCC K-9 Comfort Dogs serving in more than 27 states. LCC operates training facilities in Illinois and Nebraska.

Northeast Community College student Rose Graham, of Pierce, enjoys the company of Joanna, one of four trained K-9 comfort dogs who visited the Norfolk campus during finals week recently. Joanna and three other dogs and their handlers from Lutheran Church Charities K-9 Comfort Dog Ministry were invited to the Northeast campus in Norfolk by Kenzie Pasold, campus advocate for Bright Horizons.