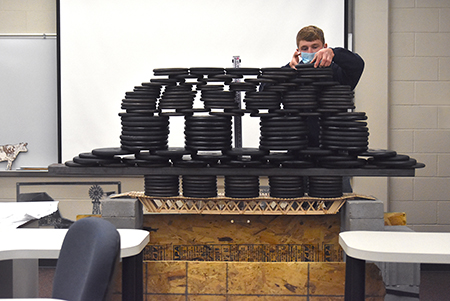 NORFOLK, Neb. – It may be made out of popsicle sticks and glue, but Lucas Schaefer’s lightweight bridge, “Golden Nugget” can be compared to another “golden” heavyweight in San Francisco Bay for its structural integrity.

Schaefer was among six Northeast Community College students who participated in the drafting program’s popular bridge competition recently. His 3.37 lbs. bridge held 2,295 lbs. of free weights and an eight-foot steel channel, or 681.3 times its weight, before collapsing into a pile of rubble that pulverized a section of concrete block that served as supports to hold the structures.

Schaefer was presented $100 from the Nucor Detailing Center, which awards the overall winner from the competition each year.

“French Fry,” the 2.63 lbs. bridge constructed by Grant Lambrecht, Pierce, didn’t do so bad either. It held 970 lbs. or 367.8 times its weight. He finished second this year and placed sixth on the all-time Top 20.

Other students competing were Sara Podliska, Norfolk, and Hunter Clouse, Norfolk, whose bridges faced similar fates of collapse after holding the weight. Podliska’s 1.81 lbs. bridge held 85 lbs., while Clouse’s 2.06 lbs. bridge held 75 lbs. of weight. Any bridge that holds 45 times its weight receives an A while anything 50 times and higher receives a 100%.

The 10th annual competition is designed to demonstrate the structural integrity and structural concentration of the bridges the students spend weeks and months constructing. The competition, organized by Michael Holcomb, Northeast structural CAD (computer aided design)/drafting instructor, is held at the conclusion of the academic year each May.

“This contest is based entirely off weight ratio. Lucas’ winning bridge holding 681 times its weight is mind blowing,” Holcomb said. “I really only expect them to get to a 50 times weight ratio. Lucas announced to the class in January that he planned on winning.  I really love his determination. This group did an exceptional job and I’m going to miss them.”

Holcomb said the pandemic forced his students to go through extraordinary measures all year long. With all of their classes taught in a virtual environment, he said he’s proud in how they finished the year.

“I’m very thankful to the College for allowing us to do this, with limited attendance, it was one of only a hand full of times this class meet face to face this year. Being here in person gives us some sense normalcy to end out the year,” he said. “I really appreciated the audience’s reaction and response to the incredible weight these little bridges hold.  I am so thankful to everyone at Northeast who make this competition possible.”

Due to the pandemic, all competitors wore facemasks and protective leg and foot protection. For the second year, the competition moved back into Holcomb’s classroom in the Maclay building from the Cox Activities Center Theatre on the Norfolk campus as audience members could only watch the event through an online livestream produced by Brian Anderson, media arts – broadcasting instructor, and Media Arts – Broadcasting student Leonard Schaecher, O’Neill.

The program may be viewed anytime at https://team1sports.com/northeastcc/.

Northeast Community College drafting student Lucas Schaefer, Stromsburg, places weight on his popsicle stick-built bridge seconds before it collapsed under the weight of 2,295 lbs. His bridge held 681.3 times its weight in winning the annual event. He also earned second place on the competition’s all-time Top 20 list. The drafting program competition is designed to demonstrate the structural integrity and structural concentration of the bridges the students spend weeks and months constructing.