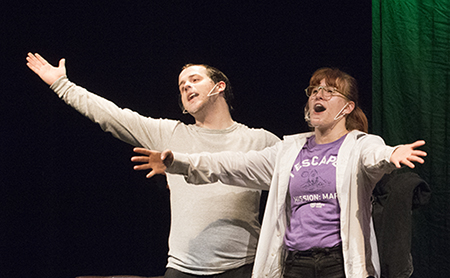 NORFOLK, Neb. – Two theatre students at Northeast Community College have been nominated for a prestigious acting scholarship named in honor of an actress who starred in a popular television sitcom in the 1960s.

Hannah Vokoun, Chelsea, Ia., and Nolan Whitney, Seward, have been nominated to audition for the Irene Ryan Foundation Acting Scholarship to help pay for further education in theatre. Students must first be nominated by judges who viewed a production in which they appeared. Vokoun and Whitney were among cast members in the Northeast’s Players’ musical of “The Taxi Cabaret,” that was staged in the Cox Activities Center Theatre on the Norfolk campus in April.

The scholarship is named after the late Irene Ryan, best known for her role as “Granny” in the 1960’s TV sitcom, “The Beverly Hillbillies.”

“Hannah and Nolan were nominated for the scholarship by respondents for The Taxi Cabaret,” said Adam Peterson, director of theatre at Northeast. “It’s a big honor for them and now they will compete with students from other colleges and universities for the scholarship at the Kennedy Center American College Theatre Regional Festival in Des Moines in January 2022.”

Vokoun and Whitney will be among approximately 200 students who will audition for the scholarship. They will both choose comedic and dramatic pieces and monologues to perform at their auditions. They will have to go through a number of rounds to be considered for the scholarship and to reach the finals, which includes performing their pieces.

Northeast Community College theatre students Nolan Whitney, Seward, and Hannah Vokoun, Chelsea, Ia., perform in the recent Northeast Players’ theatrical production of “The Taxi Cabaret.” They have both been nominated to audition for the Irene Ryan Foundation’s Acting Scholarship based on critiques of their performances. The scholarship is designed to help pay for students’ further education in theatre.