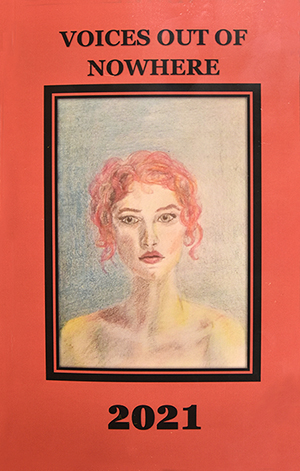 Voices Out of Nowhere is created and published each spring semester by the College’s English Department through the Editing & Publishing class. With the assistance of Marathon Press, the students work together to edit, create, and publish the book.

"The book is made up of submissions from students at Northeast," said Courtney Ullarich, Norfolk, student editor. "The submissions that are going to be in the book itself are chosen by the Editing & Publishing class, then are sent off to be judged for cash prizes. Any student can submit their poetry, prose, essays, and/or artwork all year long for a chance to see their work get published and possibly win a cash prize."

There is no limit on how many pieces of work a student may submit, but there is a cutoff date. Any submissions after that date are considered among the following year's submissions.

Two awards were presented in Art. Red-Headed Girl, by Elizabeth Dodge, St. Helena, which is also on the cover of the book, was first, with Alexis Stone’s Photo of Lake, second. Stone is from Seward.

English Instructor Bonnie Johnson-Bartee oversees the project. She said the students put in extra work to produce a book the College can be proud of.

“The Editing and Publishing major and courses have recently gained a lot of popularity, so it was only fitting that the College offer this course,” she said. “I went through the process of creating ENGL 2090, and today we have a professional book to showcase the students' work. The students also gain knowledge of the printing process when we tour Marathon Press at the end of the semester.”

The origins of the book can be traced back to the 1970s. Johnson-Bartee said she has copies of every book published.

“The late Pat Keating brainstormed the original book and then he and Barbara Schmitz started putting it together, including primarily students as well as some faculty's work. Historically, the job of putting the book together was the responsibility of faculty members,” Johnson-Bartee said. “After I took over the project from Neil Harrison, and I had been doing it a few years, I decided to create a class where I could put the book in the students' hands -- as technically, it is theirs.”

To obtain a free copy of Voices Out of Nowhere, contact Johnson-Bartee at Northeast Community College at bonnie@northeast.edu.