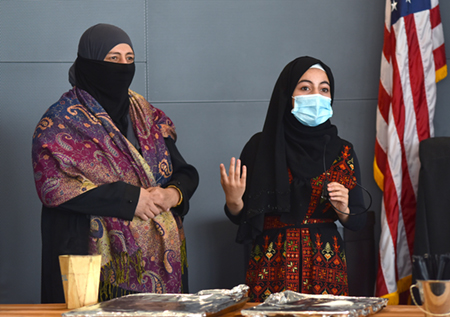 NORFOLK, Neb. - Northeast Community College employees, students and members of the public had the opportunity to explore a new dish during a lunch recently.

Kebsa chicken is a Syrian delicacy similar to the American version of chicken and rice with few added ingredients including common Middle Eastern seasonings served over rice with onions, garlic, tomatoes, and kebsa seasoning. It’s a recipe that Chef Aisha Al Saleh has prepared many times.

Al Saleh and members of her family were on hand in the College’s Hawks Point dining hall on the Norfolk campus as part of the New American Culinary Exchange Experience. The event was hosted by the College’s IDEA (Inclusivity-Diversity-Equity Alliance) sub-committee.

Al Saleh’s daughter, Roukaya, shared the story of her family who now reside in Omaha. Aisha Al Saleh was born in Syria where she worked as a chef. Political instability forced her and the family to leave the country. They initially fled to Jordan in 2011 and then immigrated to the United States in 2016 to make a better live for themselves.

“My parents wanted to change our lives. We want to inspire people by new cultural food, new language and everything. And we’re really happy about that,” she said. “A lot of American people have been inspired too by Syrian food and like it.”

She said he family hopes to open a larger restaurant one day.

The New American Culinary Exchange Experience is part of the New American Arts Project, created by Lutheran Family Services of Nebraska in 2016 in an effort to connect refugee artists to rural Nebraska communities. Northeast Community College was selected as one of the project’s traveling “pop-up” refugee presentations when Pam Saalfeld, chair of IDEA, applied online.

“Food is cross-cultural. Every culture, every family has a favorite dish,” Saalfeld said. “What better way to make new friends than eating with others and telling stories.”

Chef Aisha Al Saleh, of Omaha, listens as her daughter, Roukaya, speaks during a New American Culinary Exchange Experience at Northeast Community College recently. The event was hosted by the College’s IDEA (Inclusivity-Diversity-Equity Alliance) sub-committee - in partnership with Lutheran Family Services of Nebraska.