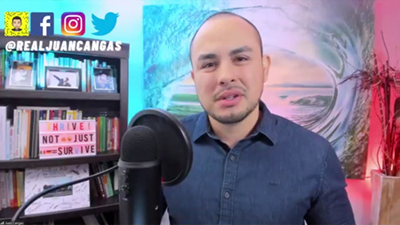 NORFOLK, Neb. – A nationally known youth motivational speaker said he never wants his audience to think of his presentations as just, “some speaker guy” talking to them. Juan Cangas said his goal is to share stories in how the biggest changes in his life have come from having honest conversations with people he has close relationships with, which he hopes will be inspiring to others.

While growing up in Grand Island, Cangas, of Omaha, built relationships with others because he wanted to belong, but admittedly they were with the wrong people. He said his mother was the one person who set him straight with a lesson that has stayed with him to this day.

After living for years hearing a voice of doubt that constantly told him he would never amount to anything, it was his mother who repeatedly reassured him just the opposite. Cangas told the high school students they need to develop similar types of relationships with people they trust and with those who will lead them in the right direction.

“You have to know what your goals are. You got to know where you’re going. You have to have a vision for your future because if you don’t, then you sometimes trust the wrong people like I did,” Cangas said. “ … Life is full of defining moments and if you don’t have goals for your future and don’t know what you want out of your life, those moments will define you, instead of you defining those moments.”

Cangas shared his story during a Latino Youth Summit, hosted by Northeast Community College and sponsored by the Nebraska Public Power District. The summit, held virtually this year, attracted approximately 100 students from high schools in eastern Nebraska and northwest Iowa. It allowed freshmen through seniors to come together to be motivated and learn more about higher education opportunities.

Another presenter, Omaha small business owner MiguelAngel Chavez said he understands it can be intimidating for students to question how speakers at such conferences seem to have all of the answers. He said he determined that such individuals are explorers who were not scared to go out and make mistakes in pursuing their goals and then share their stories so others may learn from them.

“(These people) were able to discover a passion to seek that flame and have a drive to achieve their goals in life. … “As I grew older, I did search within. I started looking and asked myself, “What matters to me?’ I didn’t want to be that person that followed their passion, I wanted to be a person who invested in their passion.”

“During the journey of finding what your passionate about, you’ll come across finding something you love doing that even if you fail, you’ll get up and try again. Once you find that love and fire, it’s worth the late nights, it’s worth the sacrifice.”

Also, during the summit three students spoke of their journey of attending college at Northeast Community College, including Alondra Gonzalez, a junior at Bishop Heelen Catholic High School in Sioux City, Ia., who has already earned a year of college credits through Northeast’s dual enrollment program.

Gonzalez said she has taken online general education classes through Northeast for the past two-years.

“I knew attending college would open a lot of doors for me in the future. I thought at first it was going to be a big challenge, but honestly, if you’re able to manage your time correctly and balance it all out, it’s possible. You can do it.”

Alex Padilla, a Northeast graduate who is pursuing a computer science degree at Wayne State College, said he wished he had taken dual credit classes in high school. He told the high school students that dual enrollment will save them time in choosing a career path.

“Take those opportunities you have right now in high school and take those dual credits so you don’t have to take them in college, Padilla said. “The first two years will also let you look around and see what (career) you like. Northeast is a great school to go to for the first two-years and there are great people who will help you out. They’re here to help you and motivate you.”

Edgardo Cruz, a pre-professional nursing student, said his instructors at Northeast have served as mentors to him and have provided him opportunities to succeed in college.

“They communicate with me in person. And they’re extremely nice, which I really like.”

Cruz, who works as a patient safety attendant at a local hospital, said doctors and nurses there have encouraged him to continue his education beyond Northeast.

“That has given me more of an interest in college. I was thinking of just getting my associate’s degree, but in talking with other doctors and nurses, I actually want to pursue my career more into a bachelor’s degree.”

Maya Saenz, evening anchor at KMTV television in Omaha, served as emcee of the event. She said the summit serves as a good resource for the students to learn more about college.

“This is part of the journey of empowering Latino youth by inspiring them to dream big, get an education and seek out opportunities in both Nebraska and Iowa,” she said. “If you don’t have someone in your family who’s gone through the college experience and application process, use us because you can learn either through our mistakes or what we worked with.”

In addition, ten students who participated in the Latino Youth Summit were selected to each receive $1,000 scholarships to attend Northeast. Students selected were from Dakota City, Madison, Norfolk, O’Neill, South Sioux City, and Wakefield.