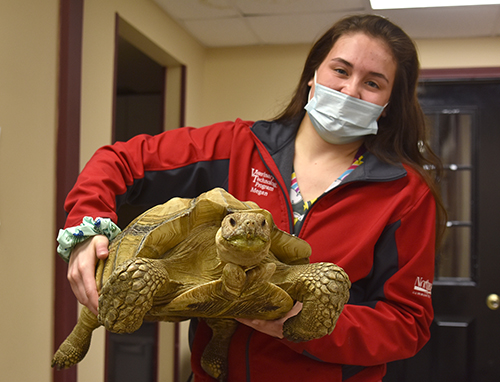 A tortoise and two ornate box turtles have taken up residence on the College Farm on the Norfolk campus providing students with an opportunity to learn more about reptiles that will serve them well once they become employed in professional clinics.

The story of George the tortoise and the turtles named Stevie and Peggy begins in Colorado when the stepsister of Instructor Dr. Kassie Wessendorf learned an animal rescue operation had to close due to the owners’ declining health. That left the three reptiles in need of a new home. Wessendorf said her stepsister knew that Northeast was looking to expand its repertoire of animals.

“And so, I called the lady that runs the rescue and we chatted and then she determined that Northeast was going to be the best fit for them. I went out there in February and picked them up and brought them back for our students.”

George is a 36-pound, 66-year-old African spurred tortoise, a desert animal that lives on land. He's been a little bit shy learning his new surroundings at the College and it has taken him some time to adjust. Wessendorf said he was previously in a house where there was approximately a half-dozen workers that would come in and take care of him. Now, he has 50 students who “love” to take care of him.

The turtles are native to western Nebraska and Colorado. Stevie was a pet and is approximately 30-years of age. After Peggy suffered a broken shell from being hit by a vehicle she was taken to the rescue to be patched up. Since no one is aware of her background, her age is unknown.

Wessendorf said laws state that such animals that are found are to be released within 100 yards of where they were located. However, in this case, since no one knew exactly where she was found, the rescue operation could not release her.

Wessendorf said Northeast has been working with a herpetology expert at the University of Nebraska-Lincoln to get the turtles back to a healthy state. Upon their arrival in Norfolk, Stevie and Peggy’s beaks and claws were extremely overgrown. But since that time, their beaks have been filed down and their claws trimmed.

“So, they're on their way to being a little bit better,” Wessendorf said.

She said the boxed turtles, in this case, are misnamed and are technically tortoises as well; they’re just smaller than George.

The distinction between a turtle and a tortoise, other than shell shape and size, is that shells on turtles are flatter and smoother, while the shells on tortoises have more of a dome and have a rougher texture. Turtles are semi aquatic - meaning they swim in water and live on land. Tortoises are more terrestrial and generally live on land. They still do need to soak in water to assist with skin health.

As an herbivore, George eats only plants. Wessendorf has been working with Chartwells, Northeast’s on-campus food service provider, to have staff save any leftovers from the salad bar in Hawks Point for them.

T.J. Feyerherm, director of dining services for Chartwells, said they provide a weekly average of 16 quarts of vegetable scraps that are still edible, but not for human consumption. This includes wilted lettuce, carrots, celery, arugula and dark greens, among others.

“It’s basically whatever we have from the salad bar that we can’t serve anymore. It normally would just go in the trash,” Feyerherm said. “We’re glad to help.”

“Actually, right now, Chartwells is feeding about 90% of George’s diet for us. So, the staff really enjoys it because they know the food doesn't go to waste,” Wessendorf said. “And we enjoy it because we get a constant supply of fresh veggies, and he loves the variety.”

Stevie and Peggy are omnivores and eat fruit, vegetables, and insects, with their favorites being crickets and earthworms.

Wessendorf said it is important to bring reptile education into the vet tech program. She said they want students to be prepared and exposed for anything that may come into a clinic.

“If you go to a wildlife rehab you may have these smaller tortoises which are native to Nebraska, and injuries to them are extremely common. They go out on the road to get warm because it's hot, the asphalt is hot, the concrete is hot and they go out there to sunbath and then get hit by a car. Many times, they are then brought into rescues. So, by having them here, it will help our students understand what they may need to care for.”

Student Whitney Podhradsky, Mount Vernon, SD, said reptiles are much different than dogs and cats, which she and her fellow students normally work with.

“I’m not super into exotics, but it is an interesting area. I really never thought it was something I would be working with, but it is fun to see and experience them because it’s not some something everybody is able to be around,” she said. “It’s not really common to see a 66-year-old tortoise roaming the halls.”

Student Morgan Olson, Tekamah, looks forward to working with the reptiles when she steps into the clinic. Reptiles are new to her, but it didn’t take long for her to enjoy working with the new residents.

“So, being able to see them now and get hands on-activities with them has been so crazy, cool,” Olson said. “Now that we get the chance to actually work with them, it'll open up other students’ eyes and minds if they maybe want to go into more reptile-based clinics or not.”

Wessendorf said one of the challenges with non-traditional pets, especially reptiles, is how they may be housed and cared for. By having them in the Northeast clinic, she said they can begin to show students how to properly deal with health issues.

“The turtles were on wood chips instead of sand, therefore their little beaks were overgrown and that could have gotten to the point where they weren't able to eat anymore. Fortunately, they weren't that bad and we’re able to take care of them. It's just good education for our students.”

The veterinary technicians will be able to take the information they learn as they prepare to go into clinics and educate pet owners. Wessendorf said as many owners fail or don’t know how to properly care for their animals, students who are training to be technicians will have that experience to share with them.

“And it's a little more relatable to their potential clients because they can say, ‘We had these in school, so I know exactly what to do.’”

George, Stevie and Peggy have made an impact on the students in the short time they have been at Northeast.

“My students love them,” Wessendorf said. “I cannot walk into this building without somebody either telling me a story about either George or the two little ones, or without catching somebody petting on them or loving on them. You know we see dogs and cats all the time. They're common, but we don't get to see these more exotic animals and so I think by bringing that here, it’s boosted their passion.”

And they have helped in other ways that students may not even realize. Wessendorf said each reptile has brought a calming effecting into the lab.

“We're in the second quarter of the first four weeks and the students are taking tests and they're getting stressed. So, when they get stressed out, they come and play with our animals to destress. They've had a lot of great education so far in the time we've had them, and they love them, they’re just constantly asking questions, ‘How do I feed and what do I feed and how often do we bathe’ and this that and everything.”

There is no question Olson has a favorite – it’s definitely George.

“Everyone is so inspired by this slow creature, but he's so big. And the way he walks and his arms and everything when he eats stuff, I mean everyone just really likes him, so it's a good environment. I do like to feed him – he’s real fun! George is just one hunk of a man,” she said with a chuckle. “He’s cool and I never been around a tortoise so big in my life. It’s amazing and awesome.”

All three reptile will be making the move to the program’s new Veterinary Technology program building on Northeast’s Acklie Family College Farm in Norfolk. George will essentially get the run of the whole floor of the new Reptile Room and the two little ones will have a space to stay as well. With an average lifespan of 80-to-100 years for tortoises and 50-to-60 years for turtles, they’ll be sticking around for a while.